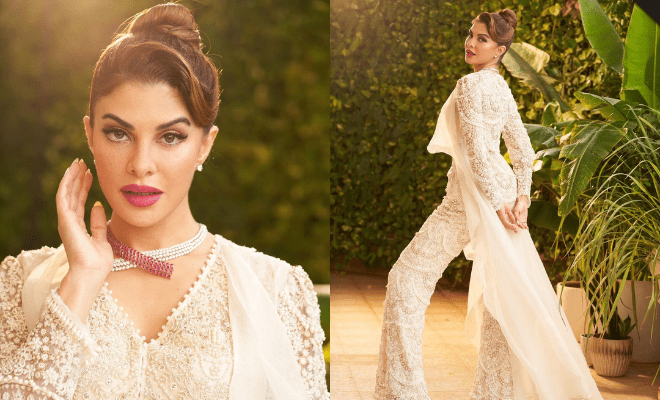 I have said it before and I will say it again, white is an underrated colour for outfits and fashion, periodt. I remember that for the longest time, my mother wouldn’t let me wear white to for any events because of its connection to funerals. But, I am very pleased to see that wearing dazzling white outfits has turned into a trend which I am completely here for. Jumping on the bandwagon, Jacqueline Fernandez has recently shared pictures of her outfit from the trailer launch of her upcoming movie, Vikrant Rona alongside Kiccha Sudeep. And we cannot deal with how absolutely stunning she looks!

Jacqueline Fernandez wowed us by sharing pictures from her look for the Vikrant Rona trailer launch. She wore an understated but elegant white look. Her outfit was embroidered from top to bottom and had lace details. The outfit had an entirely scalloped pattern. It was a 3-piece with a cropped, full sleeve blouse with bead details and embellishments. The pants followed the same pattern and had a flared bottom cut which might subvert one’s expectations from the traditional cigarette cut pants. She wore a long white shrug which was different from her very heavily detailed outfit. The shrug was a was plain which helped highlight and emphasize the beautiful look!

Jacqueline added a pop of colour with her pink and silver necklace. She matched the necklace with pink lipstick and eyeshadow of the same shade. She wore simple diamond studs to finish the look.

Also Read: Keerthy Suresh Is The Epitome Of Elegance In This White Anarkali

Vikrant Rona is a pan-world 3D film, produced by Jack Manjunath and Shalini Manjunath under their Shalini Arts banner, will be released in Kannada, Tamil, Telugu, Malayalam, and Hindi. The film will also be released in other languages, including Arabic, German, Russian, Mandarin, and English. Anup Bhandari directs Vikrant Rona, an adventure mystery thriller. Nirup Bhandari and Neetha Ashok also play important roles in the film.