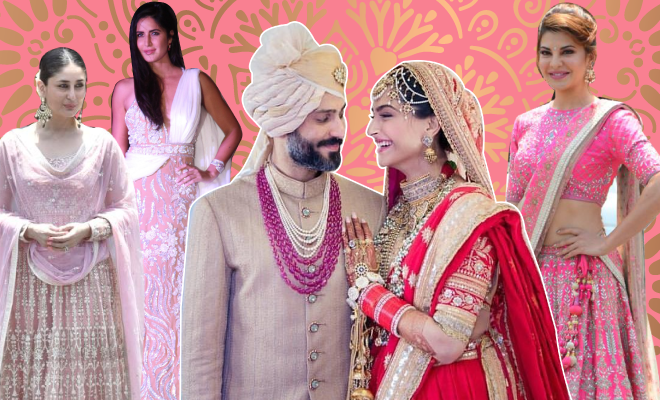 Who Wore What To Sonam Kapoor and Anand Ahuja’s Wedding & Sangeet!

And they lived happily ever after… Sonam Kapoor and her long-term boyfriend Anand Ahuja have finally tied the knot in an intimate ceremony held in Mumbai, and we cannot stop gushing over how cute this couple is!

The wedding festivities started on 6th May with an intimate mehendi ceremony, followed by which the duo hosted a sangeet ceremony last night that was attended by the biggest names in Bollywood. The sangeet looked like a hell lot of fun, with dancing, performances and Badshah and Sukhbir’s live performance! In case you did not have the time to make it, or your invite got lost in the mail, here is a look at who wore what to the wedding functions.

For D Day, Sonam wore a stunning red lehenga by Anuradha Vakil, the designer she also wore for her mehendi function. The lehenga is a traditional red hue with big lotus motifs on it and gold gota patti work running all along the borders.

She styled the look with some heavy duty jewellery. Along with her chudaa, she wore a pretty fresh flower kaleere. She also wore a two-tier layered matha patti along with a big maang tikka, old gold jhumkas and layered temple style necklaces, which included a bold, gold and kundan choker necklace along with longer necklaces to layer the look.

She kept the makeup rather simple with pink lips and subtle smokey eyes!

The sister of the bride, Rhea Kapoor wore an Abu Jani and Sandeep Khosla ensemble for the wedding. The colourful look included a jacket style blouse with a beige lehenga with colourful peacock motifs on it. She paired the look with a chunky gold necklace and gold earrings.

The brother of the bride, Arjun Kapoor looked royal in his blue Kunal Rawal kurta, which he paired with an embroidered Nehru jacket and finished the look with brown shoes.

Anshula Kapoor in a beige and pink lehenga

Anshula Kapoor wore a beige blouse with a fuchsia pink brocade lehenga skirt and a pink dupatta. She added a gold potli bag with layered kundan and emerald necklaces.

Anil Kapoor in a white kurta

There is a never a time when Anil Kapoor does not look dapper. He kept the colour palette light as it was a day wedding. He wore a white cotton kurta with layered emerald necklaces.

Looking fresh as a daisy, Jacqueline wore a pretty pink Anita Dongre lehenga with silver zardozi work on it.

Swara looked stunning at the wedding in a royal blue Abu Jani and Sandeep Khosla look, which had colourful orange, blue and green motifs on it.

Karan Johar brought all his sass and style to the wedding in a millennial pink embroidered kurta with rose gold sunnies.

A pastel palette is just perfect for a summer wedding, and Janhvi and Khushi did it just right. Khushi wore a yellow lehenga with mirror work all over it, and Janhvi wore a pastel pink lehenga with hues of gold, green and yellow on it. Also, brownie points for how cute Janhvi’s hairdo is.

Kareena Kapoor wore a beautiful blush pink Anita Dongre lehenga for the wedding. Saif, on the other hand, kept things simple in an ivory kurta, and Taimur Ali Khan was the most handsome boy who attended the wedding in his white kurta and well-groomed hair.

Karisma wore a lehenga from Sabyasachi Mukherjee’s Spring Summer 2018 Collection. She paired the look with a maang tikka and a gold and kundan choker.

Rani Mukherjee wore her trusted designer Sabyasachi Mukherjee. She looked royal and pretty in this rich blue lehenga with gold zardozi work on it.

Ranveer Singh in an all-white look

Ranveer Singh wore an all-white kurta and pyjama look for the wedding. He styled the look with a Nehru jacket and topped the look off with a pair of white juttis.

That’s it for all the grand wedding looks!

Now let’s have a look at some looks from the sangeet night, where the theme was traditional white and gold!

Anil Kapoor in a white kurta

Masaba Gupta in her own design

Pernia Qureshi in an ivory saree

The wedding was followed by a grand reception party, check the reception party here. Which look did you guys like the best? Let us know in the comments below