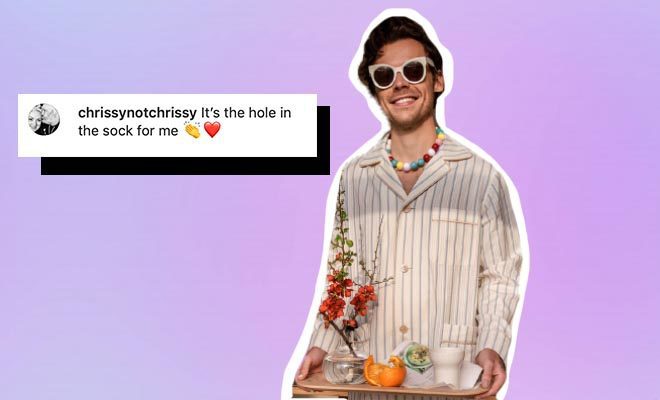 Harry Styles is never a disappointment both on the musical, and fashion front, (also his enlightening words). And dishing out some spectacular looks for the Better Homes and Gardens magazine, Harry opened doors to his home perhaps not the physical one, but what resides in his head, for the world to see. For the magazine’s monthly edition, Harry went deep down the memory lane and pealed off the many layers of his bedsheets of course, coz it’s all about returning back home.

The many glossy pages of the magazine‘s monthly edition unveil Harry posing in weird angles as he flashes his brightest smiles for the readers. A slice of his personal style as many would know, Harry wears a beaded neckpiece, plaid pants, cowboy boots and comfy bermudas as he takes a dip in the wild grass of a deserted farm, and spills the beans about his latest album–Harry’s House.

While everything that the “Watermelon Sugar” singer speaks about feels like a sweet song, a picture from the editorial shoot has stolen the limelight. Amongst a number of stylish pairings, Harry in an image is seen serving breakfast in bed, as he takes a dip in a cute striped Gucci pyjama set, white sunglasses and heavy beads around his neck. But wait, the real star of this image is neither the breakfast nor the bed, but his peeking toe. Yes, my friends, just like all of us Harry too has a pair of torn socks and he’s suddenly so relatable to me. The cutest thing about the image is also his green manicure that peeks through the torn end of the red sock (Harry, there’s no one like you).

Mr always high on Watermelon Sugar’s brand new style has fans surprised with many reactions raining on the internet. I mean it’s a head-to-toe Gucci set and it’s been a long while that people saw a thread blast out into a hole, on a magazine cover. Well done Harry, this indeed is my favourite image. Also, take a look at some of these reactions.

At the end of the day Harry styles is right and has even his toe trending so pic.twitter.com/F6LflUwODa

That toe pic is worth $7,000 what are you doing giving it out for free, @Harry_Styles ???? pic.twitter.com/M1yMpPocem

harry blew all his money on gucci and now can’t afford socks pic.twitter.com/jD84sm35si

i wonder if harry paid extra for socks with holes in them pic.twitter.com/Ai3DPEPP60

harry: billionaire
also harry: owns socks with a hole in like my broke ass also does pic.twitter.com/HVq5kX9AvX

only harry would turn torn socks into fashion pic.twitter.com/v0baDTIdNx

Also Read: 10 Outfits From Birthday Boy Harry Styles’ Fluid Fashion Closet That Can Make It To Every Woman’s Wardrobe

Clicked by the legend himself–Tim Walker, the images fit well with Harry’s revelations that take us through some of his well-kept secrets about labelling his sexuality, which he feels is “outdated”, song names from his latest album and his ever-glimmering charm.

Harry Styles unveils the tracklist for his upcoming album #HarrysHouse out May 20th. pic.twitter.com/u2FH2WlEfP

Harry has just had an amazing week in Coachella, headlining the music festival and cooking up another marvellous Gucci moment. We can’t wait to swing along his latest music now.