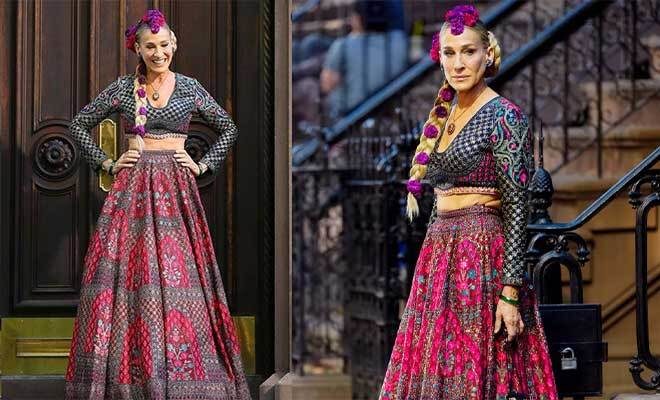 The Curious Case Of Carrie Bradshaw’s Saree In ‘And Just Like That’. Or Shall We Say, Sorry Not Saree?

And Just Like That, the hyped Sex And The City reboot has been making it to the news headlines ever since the launch of its first promo. Be it the comeback of popular character names, fresh plotline, or Samantha being missed in the reboot series, And Just Like That… has slid into the tough talk a lot many times. And now it’s the fashion troop that seems a bit naaraaz. Yep, I am talking about the curious case of Carrie Bradshaw’s appearance in the Falguni Shane Peacock lehenga, called a saree in a recent episode of the series, which has raised major eyebrows. Well, representation of the Indian culture on a global platform is always welcome. But can we at least not appropriate the culture while at it?

Let’s rewind a bit. Do you remember the first image of Sarah Jessica Parker in a lehenga that went viral? Oh boy, that really escalated my excitement to watch the popular character twirl in and celebrate the Indian culture. But what came upon the SATC fans was a tough one to assess. It all happened when in a scene Carrie is shown prepping for a Diwali party and she visits her friend Seema who owns a store in Manhattan. While looking for an outfit to wear, she gets her hands on a beautiful Falguni Shane Peacock ‘lehenga’ which is termed as a ‘saree’ by the two characters (Umm, educate your audience better, sisters).

What additionally makes the franchise’s Indian fans even more touchy (and rightly so) about their cultural portrayal is the usage of the term ‘saree shop’ which deems one of the biggest Indian fashion designer’s creations (not fair) as a mere saree store. I mean, not all Indian wear is saree, no? And this designer duo has dressed the likes of Beyoncé, and NOT in a saree! All in all, the generalisation is something that the fashion troop is unable to digest. And rightly so. Which makes the ‘Diwali special episode’ a grossly missed opportunity to me and many of us.

Reacting to this saree mess, a Twitter account shared, “someone was like ‘LEHENGA (which is what was in the shop/what Carrie wore) is too hard to say!!!’ and bc it’s less familiar to non-desi people they just had her call everything a sari ALL while italianX queen Carrie walks around saying Manolo Blahnik like it’s NOTHING!!! Can’t stop thinking about how in And Just Like That not a single thing in the “sari shop” was a sari. Cursed episode.” While, some others shared, “like girl, y’all have all the money in the budget for this show and you… can’t show clothes that are culturally correct?” and “I thought these people were supposed to know fashion.”

someone was like “LEHENGA (which is what was in the shop/what Carrie wore) is too hard to say!!!” and bc it’s less familiar to non-desi people they just had her call everything a sari ALL while italianX queen Carrie walks around saying Manolo Blahnik like it’s NOTHING!!!

Ikr lmao I thought these people were supposed to know fashion

This is exactly what we’re here trying to suggest here! I mean, for a 50-something published author and fashionista like Carrie Bradshaw, who barely misses a chance to dress up well, and keeps her fashion dictionary handy, this casual interchangeability of terms is just preposterous and hard to digest. If anything, it makes the character look dumb, which is a rather counter-productive thing to do for your protagonist, no? This goof-up reminds me of Carrie Bradshaw’s reaction to the burglar (in the third season of SATC) asking for her bag, to which she screams “It’s a baguette!”. It’s exactly how we’d like the show’s titular character to know that “It’s a lehenga!”

The drama doesn’t end there. Some furious Indian fans of the show had their share of issues with Carrie’s flower hair accessories. While many found the dramatic hair a little ‘cartoonish,’ some others said “Indian’s don’t dress up like that.” Essaying the exact amount of OTT that the New Yorker’s wardrobe is sewn of, the floral hair-do is how the west perceives Indians getting dressed. Moreover, I do think the dramatic floral hair-do is perhaps the most Carrie thing about her outfit. She does have a penchant for extravagant hair accessories. Remember that bird she wore for her eventually cancelled wedding to Big in the first movie?

But the fact that Seema’s choice of an actual saree was far better than the central character, is where the stylists just messed up.

What is also problematic here is the punctured representation of the Indian culture in front of a global audience. The portrayal of people of colour has evolved in television and film scripts. However, the latest episode of And Just Like That… does just the bare minimum and subscribes to a more general outlook of a community that is often termed as ‘loud,’ and wants to know everything about your love life, as portrayed through Seema’s parents in the episode, who enquire about Carrie’s boyfriend.

Moreover, what seemed upsetting was the exaggerated hype about the lehenga debut in Carrie Bradshaw’s closet, not meeting the expectations of what the Indian audience was waiting to watch. And while I feel it’s cool to watch our darling Carrie walk in a beautiful Falguni Shane Peacock design with A.R. Rahman’s ‘Humma Humma’ playing in the background (excellent choice), the missed lesson about India’s signature silhouette is for sure a missed opportunity.

Tell us your take in the comments below.