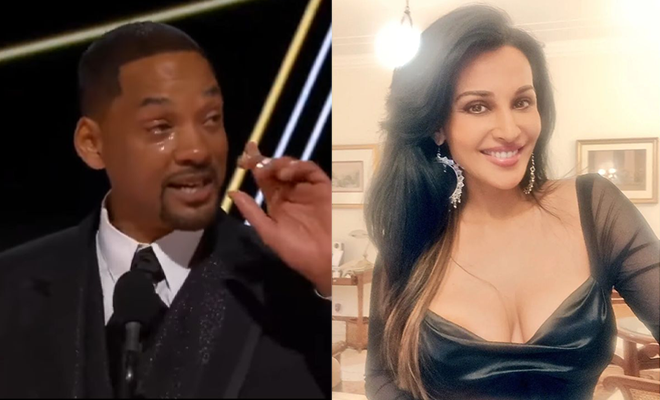 As we all know the Oscars 2022 took place at the original venue – Dolby Theatre in Los Angeles, California today. The three talented and beautiful women – Amy Schumer, Wanda Sykes, and Regina Hall kept us entertained during the ceremony as they were the host of the show. And let me tell you, it was filled with intense drama. During the ceremony, Will Smith slapped comedian and actor, Chris Rock after he made a joke on his wife, Jada Pinkett Smith. This Oscars was all about drama!

After the biggest night in Hollywood – Oscars 2022 took place on Sunday, it’s trending on Twitter along with Will Smith who won the best actor award but for all the wrong reasons. During the 94th Academy Awards, Chris Rock was on stage and tried to make the audience laugh with his insensitive jokes. After the comedian made a joke about Jada Pinkett Smith’s bald head which wasn’t even funny, her husband and actor, Will Smith went up to the stage and slapped him leaving the audience shocked. The incident that happened live made the audience including us think that it was a pre-planned joke but after the King Richard actor went back to his seat and shouted “keep my wife’s name out your [expletive] mouth,” everyone realised that it was not a joke.

Indian actress and model Flora Saini reacted to the incident and supported Will Smith. Sharing the video of the actor’s acceptance speech on her social media account, she wrote, “And this is why I love this man (heart emoji) and thank you for standing up not jus for Jada but for any actor who is made fun of for their looks or hair loss or body shape in an award ceremony by ur peers.. something sure needs to change.”

After the incident, people flooded Twitter to express their shock over it and their reactions are quite mixed.

Everyone arriving at Twitter to confirm Will Smith really did slap Chris Rock at #TheOscars2022 pic.twitter.com/LSLNJajH92

We clearly saw that Will Smith was laughing at the joke but when he noticed that Jada was not happy, he got angry as well and this user noticed this too.

we, as a society, need to make sure that when you look up "Will Smith, Oscar" this remains among the top results pic.twitter.com/ud9jUGv0sh

Lupita face when Will Smith comes from Oscar stage after smacking Chris Rock. Shocked pretty face and the she rem Kanye does it regularly.
You gotta love our African Kenyan princess just for appearing in that Oscar event and in that outrageous video pic.twitter.com/aQBqdfl87x

Also Read: ‘West Side Story’ Star Ariana DeBose Is The First Openly Queer Actor Of Colour To Win An Oscar

me not caring about the oscars but suddenly seeing that will smith slapped chris rock on twitter pic.twitter.com/ZVrztRUm0E

the people that were sitting next to will smith and laughed at the joke: #whatjusthappened pic.twitter.com/w8iRskLgY3

The celebs were so shocked!

Everyone at the Oscar’s when Will Smith assaulted Chris Rock on national television #Oscars pic.twitter.com/k42EHWsQuQ

Nicole Kidman Reacting To Will Smiths Slap Towards Chris Rock, That’s Right A New Meme Has Been Born #Oscars pic.twitter.com/Q4lj5FHQmh

Will Smith learnt from the best #Oscars 😂 pic.twitter.com/M4vQ6ZmSsn

me watching will smith defend his wife #oscars #whatjusthappened pic.twitter.com/YaPD2aa9Wr

Me during this Chris Rock and Will Smith moment #Oscars pic.twitter.com/idTP8tuRvi

Andrew is 100% scrolling thru Twitter to see what everyone is saying about the Will Smith thing. pic.twitter.com/6ivx7JsZdE

As someone who is aware of the fact that Oscars loves drama or drama loves it, I was not surprised but definitely shocked after the incident.

Priyanka Chopra, Lilly Singh And ‘Never Have I Ever’ Cast Among Other South Asian Celebs Share Pictures From Oscars Pre-Award Event