‘Stranger Things 4’ Trailer: The Hawkins Gang Reunites To Fight A Scary New Mouthbreather From The Upside Down 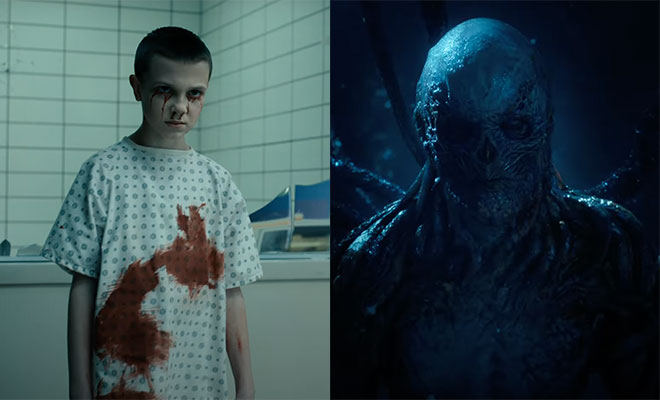 The trailer launch was preceded by a 24-hour countdown, displayed with the Creel House clock making some monstrous growling noises! And finally, we had our glimpse of the beloved gang, Will, Mike, Dustin, Lucas, Max and of course, Eleven, trying to live a normal life, in the wake of the Battle of Starcourt.

The events of Stranger Things 4 are set six months after the Battle of Starcourt, which destroyed Hawkins, and of course, took the beloved Chief Hopper away. In its aftermath, our favourite group of friends are separated for the first time ever, and trying to figure out how to do this high school thing. We see Max miss her brother Billy, who was another casualty in the Battle Of Starcourt. Oh, we miss Billy too! However, there’s no time to nurse those feelings because danger lurks again, lunging for the Hawkins gang. There’s a new mouthbreather in town, a supernatural creature from the Upside Down, a cross between a human and a Demogorgon, who looks incredibly terrifying, and who believes it has already won the war.

What also makes this scarier is that Eleven is without her powers! And there’s no Hopper around. I mean, yes, he is alive, but he is so far away, in Russia! So once again, I believe it is up to the kids, and the semi-adults, Nancy, Jonathan, Steve, and Robin, with Joyce of course, to solve the new mystery which could finally put an end to the horrors of the Upside Down.

The trailer got me so amped up that the slight sadness at this being the end was kinda forgotten for a second there! I spotted lots of Eleven scenes in the lab. I think Hopper is also stirring up trouble wherever he is incarcerated. But what I am most excited about is the character of Victor Creel, played by horror legend Robert Englund aka Freddy Krueger from The Nightmare on Elm Street! In a brief description shared by the official Stranger Things Twitter account, Victor Creel is described as “a disturbed and intimidating man who is imprisoned in a psychiatric hospital for a gruesome murder in the 1950s.” The gang can be seen investigating an old, scary-looking house, which seems to belong to Creel!

Honestly, I cannot wait for Stranger Things 4 Volume 1 to drop on May 27, followed by Volume Two, which arrives on July 1, 2022.