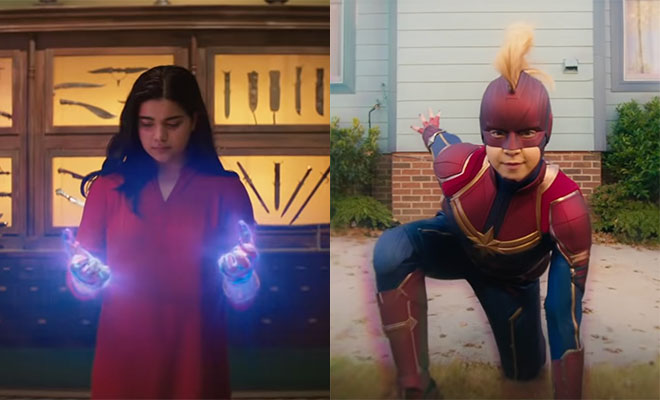 Imagine you’re at work on a blah Tuesday, ready to pack up and go home, when BAM! Disney+ drops the trailer for the highly anticipated series, Ms. Marvel. When I tell you I screamed! Ms. Marvel will mark Marvel Studios first take on Kamala Khan. Who is that, you ask? Well, the mantle of Ms. Marvel has been held by multiple women in the comics, including Carol Danvers, aka Captain Marvel. But Kamala is a teenager, which makes this a pretty big deal! Another thing that makes this a big deal? She’s the first Pakistani-American and Muslim superhero in Marvel! I say, bring it on! With this trailer release, we also get a release date for the Disney+ series, which is all set to drop on June 8, 2022. I am so excited. But wait, where is Fawad Khan?

It took the trailer literally seconds to win me over, because it is set to Blinding Lights by The Weeknd, a song that is peppy and supercharged and will put you in a good mood, right away. And then there’s Iman Vellani as Kamala Khan, playing the part of this spirited high-school going teenager who lives in this fantasy world and dreams of being a superhero. She dons Avengers t-shirts featuring Captain Marvel, who she idolises, and is considered the typical geek, with a crush on a boy who would be considered “out of her league”. Add to that, the whole comic book look and feel that has been given to it with speech bubble pop-ups makes it look like your favourite teen comedy. But it isn’t, because this is a Marvel Studios story, which means there are going to be high stakes. Once a superhero, with great power comes great responsibility, no?

Can this 16-year-old brown girl from Jersey City actually live up to the expectations that come with the mantle of Ms Marvel and being a superhero? I cannot wait to see!

You can watch the Marvel Studios Ms. Marvel trailer here:

My expectations from Ms. Marvel are sky high after watching the other Disney+ series. The production and visual effects look incredible. I am looking forward to seeing how the series explores Kamala’s Pakistani-American heritage; I did catch glimpses of her relationship with her family, a namaaz scene, and was that some dancing? With the direction that Marvel Phase 4 is moving into, we can expect a fine balance of fun and high stakes, and of course, some surprise appearances by MCU characters.

But wait, where is Fawad Khan? Remember when Fawad Khan during an interview, said he could neither “confirm nor deny” that he is going to be making an appearance in Ms. Marvel. There is no official news out yet. What we do now know though is that actor Anjali Bhimani is in the series.

Marvel boss Kevin Feige has said that Ms. Marvel will eventually make her way into the MCU movies too. The series has Adil El Arbi and Bilall Fallah, Sharmeen Obaid-Chinoy and Meera Menon as directors on the project.

Created by Sana Amanat, G. Willow Wilson, and Adrian Alphona, Kamala Khan is the fourth character to take up the pseudonym of Ms. Marvel in the comics. Kamala is a 16-year-old Pakistani-American, living in Jersey City, New Jersey, and spends her time idolising Carol Danvers, who in the comics, is the first Ms. Marvel. Kamala Khan’s Ms. Marvel first appears in the comic book Captain Marvel #17 (November 2013). In February 2014, she got her own series, thus making her Marvel Comics’ first Muslim character to headline her own comic book.

I cannot wait to see this series!