‘Maja Ma’ Trailer: Cool Mom Madhuri Dixit Has A Fall From Grace In This Family Drama That Boasts Of An Exciting Cast 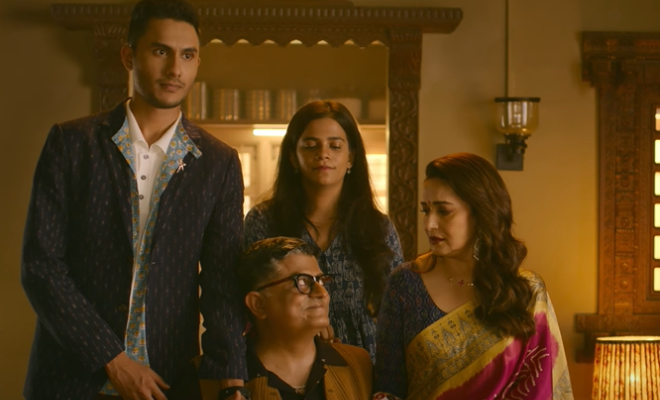 One actress from the 90s who still holds a special place in my heart is Madhuri Dixit. When I first saw her in the song ‘Ek Do Teen’ from Tezaab as a kid, I sort of felt drawn to her right from that tender age. Growing up, I tried and watched as many Madhuri Dixit films as I can but recently, my excitement knew no bounds when I learnt that she is going to play a Gujarati mother in a film titled Maja Ma. What better combination than to see my favourite actress speak my mother tongue, do some graceful Garba steps, and gear up to deliver yet another solid performance? Maja Ma (meaning ‘I am fine’) is a family dramedy starring Gajraj Rao, Ritwik Bhowmik, Barkha Singh, Sheeba Chaddha, Srishti Shrivastava and Rajit Kapur in the lead roles. The film is directed by Anand Tiwari and is a Prime Video original.

The trailer begins with Ritwik Bhowmik AKA Tejas introducing the members of the Patel household. Starting with his father, played by Gajraj Rao, who doesn’t know how to speak English; his sister played by Srishti, who is a bold and bindaas girl; then comes his mother, played by Madhuri Dixit AKA Pallavi Patel. He describes her as a perfect woman who is also the backbone of their family and is much-loved in society as well.

Tejas falls in love with Esha, played by Barkha Singh. She is an NRI, whose father is clearly seen getting attracted to Pallavi. Tejas and Esha are to get engaged but then the unthinkable ensues. A video that shows Pallavi in a compromised position gets leaked which leads to the Patel’s perfect family falling apart like a game of dominoes.

What the video contains is not shown in the trailer but from Gajraj Rao’s dialogues, it appears it was related to the matters of the bedroom. She is questioned by her children on how could she let such a thing happen but Pallavi stands up for herself saying that she is more than someone’s wife and a mother. How will Pallavi get her family out of this mess, and save Tejas and Esha’s relationship is something that we will have to watch the movie for.

Ritwik is returning after delivering two great performances in Bandish Bandits and Modern Love Mumbai. What also happened to be a pleasant surprise was a glimpse of the popular Gujarati actor Malhar Thakkar in the trailer. Quite interestingly, he happens to be the only Gujarati actor in a film about a Gujarati family whose title is also Maja Ma! Apart from this, we also got to see a jhalak of Madhuri Dixit doing some jordaar Garba during the song ‘Boom Padi’ which is already receiving a lot of love from the audience.

The plot of the movie looks solid, as it showcases Madhuri Dixit playing a very different character. The contents of the leaked video have us wondering what might be there in it to wreak such havoc on her life. Given Gajraj Rao’s perfect comedy timing and Madhuri Dixit’s exceptional acting skills, Maja Ma looks like the perfect family entertainer. Maja Ma is an Amazon Original movie.