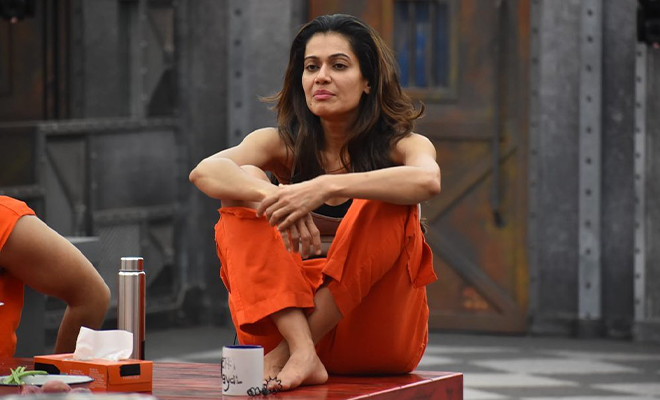 Remember the days when we all would watch Savdhaan India and see all those stories about tantric and kaala jadu? Now imagine someone, an educated woman, a celebrity even doing kala jaadu and vashikaran? Crazy, right? In the most recent episode of Kangana Ranaut’s Lock Upp, actress Payal Rohatgi revealed that she did ‘vashikaran’ to give her career a boost. The actress revealed this secret in order to stay in the game and save herself from elimination. We just can’t handle this. What is even going on in this show!

During the episode, Payal Rohatgi shared that she has been in the entertainment industry for 15 years and there was a time in her life when all was not well with her career. Speaking about the same, the actress shared that she did a ‘tantric puja’ to give her career a boost. She said that while no educated working woman would think of doing a ‘tantric puja’ to amp up their career and even if they do, they’d keep it hidden. Talking further, she shared that she did something called vashikaran after a man fin Delhi told her to think about the person or bring one of their possession in order to control that person. Payal Rohatgi also revealed she did many things but nothing really helped her but she was scared to share it with anyone. Well, we agree with Payal, she should not have talked about black magic and vashikaran. I mean we’re living in the 21st century and we have celebs on reality shows talking about such age-old unrealistic concepts.

“I had this fear that if I tell anything to anyone, or my mom that I did vashikaran to save my career and it didn’t help me, people would make fun of me. This has been a secret, which I don’t think any professional would seek to push their career,” said Payal Rohatgi. Well, I can’t speak for all educated, working people not wanting to practice black magic considering the fact that we have an actress who just BTW is a computer engineer, confession to trying her hand at vashikaran! To say that I am beyond shocked would be an understatement.

Responding to the confession, host Kangana Ranaut pointed out that Payal Rohatgi tried to control someone using black magic but she does not need to do so because she can simply control people as she is beautiful and talented. She also recalled the time when she came to the entertainment industry when she was also told that ‘ye ladki kaala jaadu karti hai‘. “When a girl is successful, people doubt her credibility… kuch toh tilasmani taakaat hogi. You have shown a lot of strength in telling this though it bombed,” said Kangana Ranaut.

Payal Rohatgi went on to add that it’s the religion that believes in doing things like this to which Kangana Ranaut responded that there is no such thing and asked the actress to stop being an ambassador of Hinduism. She also pointed out that Payal wants to marry her long time beau Sangram but at the same time, she’s also opening up about practising black magic and vashikaran. Kangana told Payal that her actions have given Sangram’s friends a lot of gossip material while adding that even her beau must be wondering if he actually likes her or if she did black magic on him. “Let him believe what he wants to believe. I have not done it on him. We are not vashikaran product,” replied Payal Rohatgi.

Also Read: ‘Lock Upp’: Poonam Pandey In A Fit Of Rage Calls Nisha Rawal ‘A Bloody Housewife’. Is That Supposed To Be An Insult?

Okay…..I will take a moment to digest this information before I point out that Hinduism does not believe in doing black magic. If anything, our religion has time and again pointed out how bad black magic can be for the people doing. And why on Earth do we have celebrities talking about something like this on an OTT platform? TBH, this show just needs to be cancelled. We don’t know what’s worse, Payal Rohatgi practising black magic and vashikaran or her talking about it on a reality show!

‘Lock Upp’: Sara Khan’s Ex-Husband Ali Merchant Is The New Prisoner In Kangana Ranaut’s Jail. It Smells Like A Tadka Of Drama