Don’t Ask Kajol To ‘Palat’, She’s Only Looking Forward To Her OTT Debut With Disney+ Hotstar. 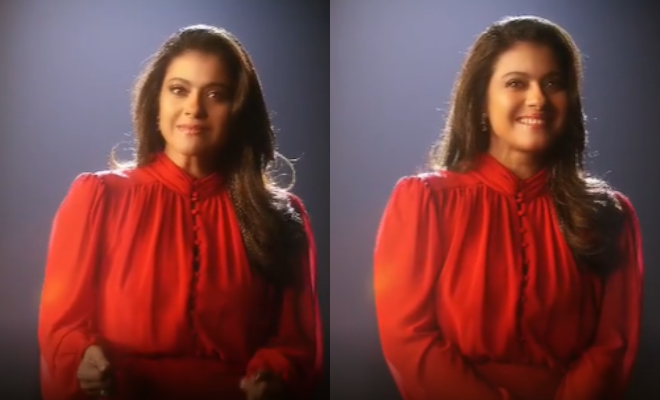 Several actors and actresses made their OTT debut when films and other projects were majorly getting released on OTT platforms amid the raging pandemic. Web series also saw a huge rise during this period which saw many prominent actors from the film industry being cast as lead characters in them. And now, the moment a lot of fans were waiting for a very long time has become. Kajol, who is one of the most loved actresses, is now gearing up for her OTT debut with Disney Plus Hotstar. She broke this news in a fun video that she shot.

The video starts with the spotlight coming to life and a voiceover saying that she is the same actress that people are waiting to grace the OTT screens with her versatility. The voice also made the audience anticipate her as she dramatically turns to the camera when she is asked to ‘palat’. Naturally, fans were expecting to know more about her project, the name, what kind of show it will be, etc etc, but Kajol asked her fans to wait to know more information about it. The video was shared with the caption, “Kuch kuch ho raha hai, tum nahi samjhoge. Can you guess what we’re up to?”

Also read: 3 Reasons Why We Think Kajol And Sara Ali Khan Would Make The Best BFFs Of B-Town

Kajol making her OTT debut is a very big deal as she was last seen in the Netflix film Tribhanga which went on to win people’s hearts. Apart from this untitled series, she will next be seen in a drama film Salaam Venky which is directed by the Indian actress Revathi. Aamir Khan will also make a cameo appearance in the film.

Nazriya Nazim Misses Fahad Faasil, Dulquer Salmaan, Prithviraj And Others In Throwback Thursday Post, And Our Friends Don’t Even Text Us Back!