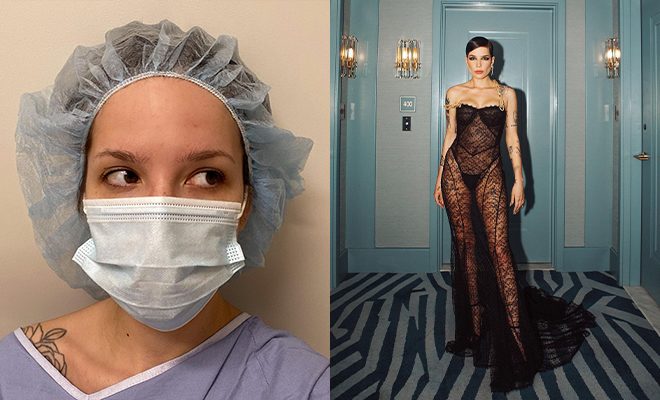 I recently had a very minor reconstructive surgery of a scar and even the most minor inconvenience has me screaming in absolute agony. And TBH, I cannot even imagine going out anywhere even after something so minor but imagine a celeb walking the red carpet (that too in style) just days after undergoing surgery? Well, that’s exactly what happened with singer Halsey. In her latest Instagram post shared just hours before the 2022 Grammy Awards, the singer revealed that she underwent surgery just three days ago.

Sharing a picture of herself in a hospital gown, Halsey shared that she had to undergo surgery just 3 days before the Grammys much like in 2017 when she had her first Endometriosis surgery 3 days before the Grammys. The singer further told fans that she is sharing this with everyone as is ‘fragile’ at the moment but also ‘excited. “The last time I attended the Grammys was 2017 and it was 3 days after I had my first Endometriosis surgery. I walked the carpet with my stitches still in 😅 As luck would have it, I’m attending tomorrow for the first time in years and I had surgery again (you guessed it) 3 days ago. Only posting this to say, if you see me be gentle lol I’m fragile. Fragile but excited :),” read the caption.

Hours after the event, the singer shared a picture of herself on her Instagram stories and revealed that she left early from the Grammys as she was feeling unwell but she had to catch BTS before leaving. Halsey further added that she’s going to eat pasta and catch up on some sleep. Take a look at her post.

Halsey was spotted looking stunning as ever as she walked the red carpet for the 2022 Grammys in a strapless corset top paired with a statement belt and a black skirt. The singer completed the look with a side-angled wide-brimmed hat with heels and a diamond necklace and drop earrings.

In 2017, Halsey had attended the Grammys after her surgery and had dressed up in a blue silk jacket and baggy pants with no shirt. She had shared that she wore the silk outfit as she did not want to wear a dress but she also wanted to go for a look that was sexy and androgynous.

This is not the first time that Halsey has spoken up about her health issues. Earlier, the singer had revealed her struggle with endometriosis and the surgeries that she had to undergo to treat the condition. Calling the surgeries ‘terrifying’, the singer had said that those who have followed her battle with the condition or have been suffering from the same know that it is not only ‘mentally exhausting’ but also ‘physically painful’.

Well, we may not be able to understand Halsey’s pain but we can sure try. We’ve got to give this singer the credit for putting up a brave face and walking the red carpet in style this Grammys. More power to you!