From Dolly Bindra To KRK, 9 ‘Bigg Boss’ Contestants Who Made Us Turn Off Our TV With Their Problematic Behaviour 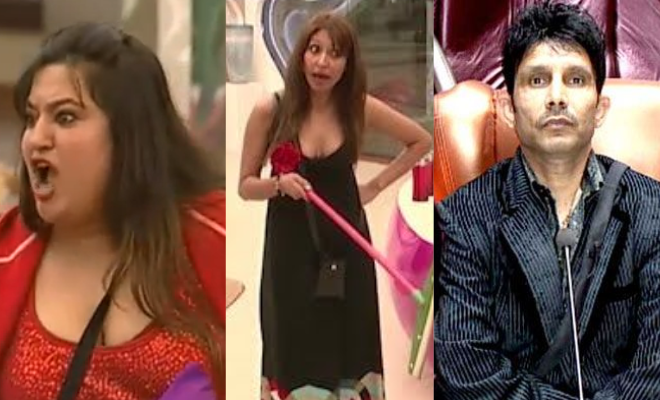 If you will ask me to name the most popular reality show in the Indian television industry, I will definitely say Bigg Boss. If you have any doubt about it, then let me remind you that it is returning with Season 16 and Salman Khan is also back to fulfil his duties as a host of the show who not only takes care of the hosting part but also gives reality checks to the contestants (they truly deserve it honestly). Having said that, our dear Bigg Boss decided to welcome director Sajid Khan to the house this year which is full of drama. But we are unable to understand why a person with multiple #MeToo allegations against him is entering the hit reality show. However, it is a fact that every season a couple of contestants enter the BB house who turn out to be a pain in the head. So, before we welcome the new contestants of Bigg Boss 16, let’s take a trip down memory lane and take a look at 9 former BB contestants who made us want to turn off our TVs because of their problematic behaviour.

We all were shocked when Afsana Khan was asked to leave the Bigg Boss house due to her violent and aggressive behaviour. The singer has picked up a knife and seemingly threatened to harm herself with it.

Kamaal Rashid Khan aka KRK was thrown out of the reality show after he ended up in an ugly fight with designer Rohit Verma and Bakhtiyar Irani. He had hurled a bottle at Rohit who was sitting across from him at the dining table but it ended up hitting Shamita Shetty.

If you don’t know about Dolly Bindra and the ‘baap pe nahi jaana‘ line, then I’m seriously judging you right now. She is regarded as one of the loudest and angriest contestants in the show’s history and she was eventually eliminated in the fourth season for using abusive language.

Swami Om was one of the most problematic Bigg Boss contestants ever. He was very rude towards his co-contestants and was thrown out of the house for throwing urine on Bani J and Rohan Mehra during a task (that was very disgusting).

Actor Armaan Kohli is known for his foul temper and we witnessed it when he participated in Bigg Boss 7 as a contestant where he got into a fight with almost every other contestant in the house. The Jaani Dushman actor had also allegedly hit his co-contestant Sofia Hayat during a heated argument between them.

Actor and fashion stylist Imam Siddique participated in the sixth edition of the reality show and he was the most problematic contestant ever. Due to his aggressive behaviour, Imam was thrown out of the house after he had a massive fight with another participant Aashka.

Arhaan Khan took part in Bigg Boss 13 as a contestant and proposed to girlfriend Rashmi Desai inside the house for marriage. Later, Salman Khan investigated his past and discovered that he was already married and was the father of a child. Furthermore, he also claimed that he provided financial assistance to Rashami.

Pooja Mishra of Season 5 coined the term ‘talk to my hand’ on Bigg Boss. She was asked to leave the house after she pushed her co-contestant Sidharth Bharadwaj.

A post shared by Word On The Curb (@wordonthecurb)

Well, let’s se what kind of drama Bigg Boss 16 will give us.