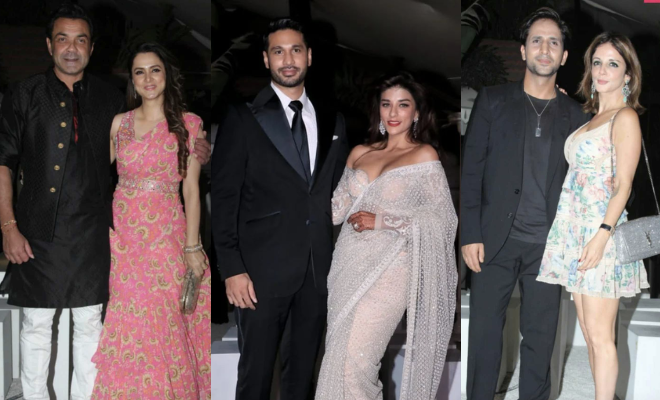 Weddings in B-Town are mad fun. No, I haven’t ever been to one but I believe this to be true. Why? Well, because just imagine all the celebs that come to the wedding or the post-wedding party – you know you’re sure to have a crazy night. And that’s exactly what I think happened at Carla Dennis and Arjun Kanungo’s post-wedding party. Yep, after the couple tied the knot in an intimate ceremony on August 10, they hosted a party post their wedding and in attendance were celebs like Susanne Khan with her boyfriend Arslan Goni, Bobby Deol, Shraddha Kapoor, Maheep Kapoor, Salman Khan, and many more.

Carla Dennis and Arjun Kanungo tied the knot on August 10, after being together for over seven years. The pics from their wedding had flooded the internet and to say they looked gorgeous together would mean to state the obvious. After their stunning wedding, the couple hosted a party which most definitely was a star-studded affair.

Also Read: Ali Fazal, Richa Chadha To Tie Knot Soon. Here Is All We Know About This Gorgeous Couple’s Wedding!

From the pictures that came out of these celebrities at the post-wedding party of Carla Dennis and Arjun Kanungo, I can say that they all brought their A-game when it came to fashion. For instance, Bobby Deol looked smashing in his black kurta and white pants, while Susanne Khan stole the show with her floral white dress. But the couple that took the center stage was hands down Carla Dennis and Arjun Kanungo. The newlywed Carla opted for a beautiful white saree with heavy embroidery whereas Arjun went for a classic tux – together they looked picture perfect.

I can’t wait for more pictures to drop!