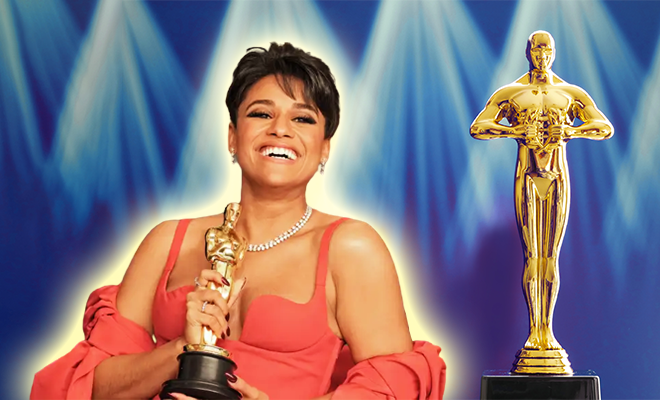 As someone who loves anything and everything about cinema, I like to keep myself updated with all the award ceremonies because it’s my job and my area of interest as well. Now as we all know, Oscars 2022 is here and it’s all about recognising the real talent. Speaking of talent, Ariana DeBose just won an Oscar and made history by becoming the first openly queer actor of colour to win the prestigious award. We are so proud of her!

On Sunday, actress Ariana DeBose won the Academy Award in the category of best-supporting actress for her performance in Steven Spielberg’s remake of West Side Story, she played the role of Anita in the film.  She made history by becoming the first Afro-Latina and an openly queer actor of colour to win an Oscar in acting.

Congratulations to Ariana DeBose on winning the #AcademyAward for Best Actress in a Supporting Role for #WestSideStory! pic.twitter.com/t2Ie9nmW4m

In her acceptance speech, Ariana DeBose gave an important message to all the queer women of colour and highlighted that their representation matters in every field including entertainment, “You see an openly queer woman of colour, an Afro-Latina, who found her strength and life through art. And that is, I think, what we’re here to celebrate. So if anyone has ever questioned your identity, I promise you this — there is indeed a place for us, ” she said.

Ariana DeBose stood on the #Oscars stage and talks about being an openly queer Afro-Latina … TEARS. I love her. pic.twitter.com/khBFP4grXL

The actress also paid homage to Rita Moreno, who played the role of Anita in 1961 West Side Story and also won the Academy Award for best-supporting actress in the year 1962. Moreno was the first Latina to ever win an Oscar and she was present during the ceremony.

Also Read: Priyanka Chopra, Lilly Singh And ‘Never Have I Ever’ Cast Among Other South Asian Celebs Share Pictures From Oscars Pre-Award Event

Now, it’s the third time that two actors won Osars for playing the same role on screen. Before this, Marlon Brando and Robert De Niro both won for playing Vito Corleone in The Godfather and The Godfather: Part II. Late actor Heath Ledger and Joaquin Phoenix both won the prestigious award as the Joker in The Dark Knight and Joker.

Congratulations to Ariana DeBose for making queer history at the Oscars 2022!

OMG! Cardi B Just Wore A Custom-Made Ensemble By Indian Designer Gaurav Gupta For Her New Song “No Love”