The Khush Khabri Is Here! Alia Bhatt, Ranbir Kapoor Announce The Birth Of Their First Child, A “Magical” Baby Girl. 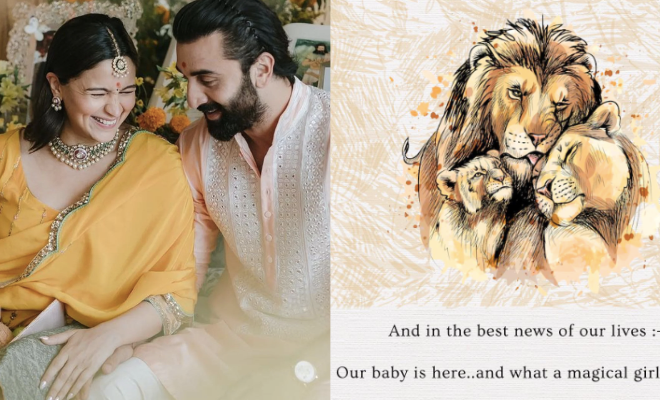 Parenthood is a new chapter in the life of a couple. From the journey to welcoming their child, every moment is special for a couple at a time like this. And currently, all of India has been waiting for one celeb baby with bated breath. Yes, I’m talking about Ali Bhatt and Ranbir Kapoor’s baby. Earlier today, Alia and Ranbir were spotted heading to the H.N. Reliance hospital. Soon after, both the mothers, Soni Razdan and Neetu Kapoor were spotted arriving at the hospital. And for the good news of the day, the Bhatt-Kapoor baby is here and it’s a baby girl. We’re loving this adorable baby announcement!

Taking to Instagram, Alia Bhatt officially announced that the couple has welcomed a baby girl. Sharing a picture of a family of 3 lions, the actress wrote, “And in the best news of our lives:- Our baby is here….and what a magical girl she is. We are officially bursting with love. Blessed and obsessed PARENTS! Love, love, love, Alia and Ranbir.”

TBH, we’re super excited to take a look at this adorable Bhatt-Kapoor Scorpio baby. We think this starkid is going to wield!

Alia was taken to the HN Reliance hospital around 7.30 am today after she reportedly went into labour. Soon after the nani-to-be, Soni Razdan and dadi-to-be- Neetu Kapoor along with masi-to-be Shaheen Bhatt arrived at the hospital. Ahead of welcoming his first grandkid, Mahesh Bhatt expressed his joy and told TOI that he is ‘waiting for a new sun to rise’. He went on the call his grandchild a ‘fresh sparking dew drop of life’. And hours later, on Sunday, November 6, Alia Bhatt and Ranbir Kapoor welcomed their first child, a baby girl.

Alia Bhatt and Ranbir Kapoor tied the knot on April 14, 2022, in an intimate ceremony after dating for 4 years. Soon after, in June 2022, the lovebirds shared the news of their pregnancy and left all of us surprised. The actress shared a picture of both of them during sonography and announced the good news. Ever since then, Alia Bhatt has been flaunting her pregnancy glow and we’ve all been waiting for baby Bhatt-Kapoor to make an entrance and it has finally happened. We’re happy for the couple and wish them all the luck, love and blessings in the world.