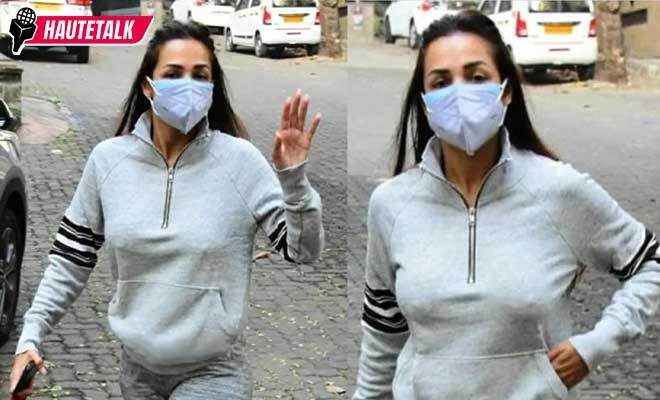 I don’t get what is the deal with people not knowing how to mind their own business. It honestly isn’t that difficult. But somehow everyone makes it their mission to comment on and discuss stuff about other people that has nothing to do with them. Now I don’t know whether this is because I am a super private person but this infuriates me. Especially when I see trolls who just leave unnecessary comments under pictures that don’t concern them, especially when it is a woman. And I don’t mean the type to ask for bobs and vegana pictures if you know what I mean. But I am talking about those who make it their mission to unnecessarily comment on a woman’s body, clothing or appearance. FYI, this whole rant is inspired by the trolls who mocked Malaika Arora for going braless on her morning walk. Yep, that’s where our priorities lie now.

Malaika Arora is trending right now for all the wrong (and creepy) reasons. The actress was out for a morning walk with her dog in a matching set of grey sweatsuits when she was shot by the paparazzi. Her pic has gone viral and people have started trolling her for not wearing a bra and underneath. Comments like ‘Shameless woman’ and ‘Double mask without a single bra’ have been left on the viral photo. Why? Honestly, why?

I do not understand why someone’s undergarments are someone else’s problem. Especially to an extent that they feel the need to relentlessly mock and troll the person. Malaika was simply out taking a morning stroll, minding her own business. Here’s a craaazy idea, why don’t you mind yours too? Who cares about her nipples showing when your disgusting and narrow mentality is out for all of us to see?

Also Read: Malaika Arora Gets Candid About Early Marriage And Working Through Her Pregnancy. She Really Did Break Barriers!

Something similar happened with Scarlett Johansson in 2012 when an interviewer asked her if she wore any underwear under her Black Widow costume. She replied saying, “Since when did people start asking each other in interviews about their underwear?” which is so valid! Tf is that question about?!

Clearly, we haven’t come very far since 2012 if we are still speculating and losing our minds over Malaika Arora choosing to not wear a bra for her morning walk. I don’t get why what one chooses to wear on their body is anyone else’s problem but theirs. If Malaika felt comfortable going bra-less, I don’t think it was anyone else’s place to say otherwise. A woman’s (or any person’s) clothing does not define her character and is no one else’s problem but their own. If you see it sexually, then the problem isn’t what they are wearing but it is in your perception. Maybe fix that before attacking and trolling others while you sit behind a screen.