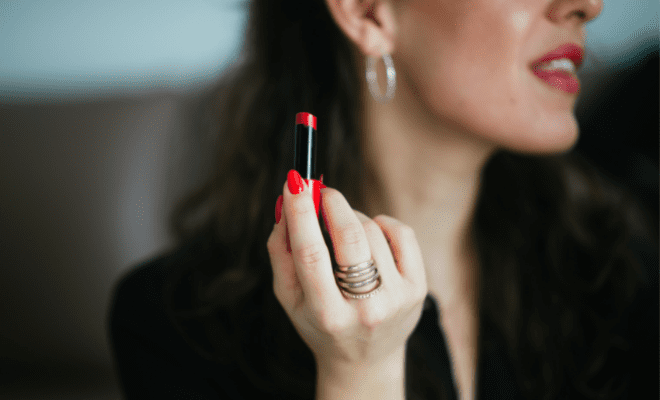 Hautetalk: How My Lipsticks Became Silent Weapons Of Rebellion For Teenage Me

I have been fortunate enough to not be born into a predominantly patriarchal family. For the most part, my parents have encouraged and supported my educational and career goals. While this is the bare minimum, in our patriarchal society, it is a privileged position to be in. However, at the end of the day, mine is still a very Indian family which might not be as regressive as the society we are a part of but still has a lot of things that they are pretty close-minded about. While my father didn’t dictate or undermine my education and career, he had his own ways of trying to assert his dominance over me as a teenager. Curfews, night outs, trips, college fests, internships, my clothing, my makeup, etc. he felt that I had to have his approval in a lot of aspects of my life. And while I was a pretty obedient daughter, for some reason the hill I chose to die on as a teen was lipsticks.

If I am to backtrack a bit, like most Indian parents, mine don’t really bother filtering themselves when they speak to me. They never have. And while I obviously don’t want people to walk on eggshells around me, a little bit of politeness and gentleness would be nice, don’t you think? As a result, I grew up with (and still have a lot of) insecurities regarding my appearance. This was one of the things my father would comment upon pretty plainly and his harsh words left a crack in my self-esteem that I am still trying to mend. That’s the thing, right? We don’t really put much value on the “little” comments we pass, especially if it is someone you are close to. I suppose we take their love and understanding for granted. And all this led to me having a lot of reservations about my appearance, going as far as genuinely believing that I am ugly.

I am unsure about a lot of things in life but the three things I know I 100% have faith in myself for are (in no particular order): my cooking skills, my writing skills and my ability to pull off almost any lip colour. I suppose I have my teen self for all of them but mostly, the last one. I remember the first time I tried wearing red lipstick. I was a youngin with no knowledge of undertones and had just picked up a red shade on a whim. My mother hated it and made some pretty mean remarks, asking me to remove it. I don’t really remember how and when, but I tried on the shade Divine Wine from Maybelline and something clicked for me. It wasn’t some sort of Archimedes eureka moment but it felt, natural? For the first time in ages, 17 year old me felt like she looked okay. As if I am not some hideous being who needed to be attacked with words that cut deeper than a blade.

Years of constantly listening to my parents’ criticism for years had made me pretty duteous and compliant. I listened to every pointless restriction my father had created for me growing up, down to the kind of clothes I wore. But for some reason, while I was okay with obeying my parents, for the most part, my makeup and my lipstick shades were something I refused to budge upon. And trust me, they had things to say about the shades I chose and the makeup I wore. It was like my own very passive-aggressive teen rebellion phase.

I explored darker and bolder shades, finding that I look good in them. Every time I’d go out with my parents, I’d make it a point to wear some shade I knew they wouldn’t approve of. I still don’t know whether it was to vex them or just to show defiance. Or both. I still remember the first time my father didn’t comment on the red lipstick I’d worn to a family dinner. He didn’t seem pleased with it but he didn’t say anything either. It was a win for me because I felt as though he gave up on overriding my choices. It was very unlike me, to be this defiant against him. But as I grew older he stopped commenting on how I did my makeup altogether. I think he made peace with the stand I’d taken. A stand that said, “I believe I look good and that is all that matters.”

Now, I’m not trying to turn my lipstick “journey” into something deeper than it has to be.  You might think “they’re just lipsticks, what’s the big deal?” And you’re right. There is no big deal. But I used to and still view my makeup and more importantly, the shade of my lipstick as my biggest weapon, the greatest indicator of which version of myself I want to put forth. I think that while teen me didn’t realise it, my silent rebellion for the freedom to wear what shade I liked was a fight to be able to express myself without restraint. While I had made peace with myself about a lot of the unnecessary restrictions my father had put on me growing up as an only daughter in the Indian society, my freedom of expression was something I refused to let go of. We all associate different aspects of our identity with different things. Some do it to the clothes they wear, the music they enjoy or what they write; it could be anything. These things make us feel comfortable and complete. For 17 year old me, that sense of identity came from the lip shades I wore. And while my “fight” is nowhere near as painful or difficult as a lot of other people have to deal with in regards to their family, I am grateful that this is the hill that my teen self chose to die on.