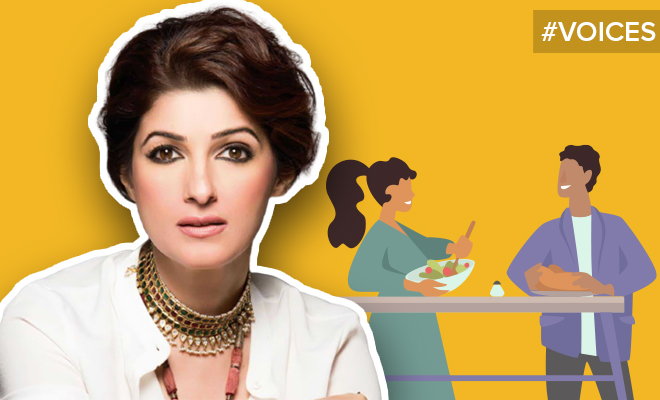 #Voices: Twinkle Khanna Says Home Responsibilities Should Be Shared. We Totally Agree Because If Women Belong In The Kitchen, So Do Men!

The rules of gender stereotypes didn’t apply in my house. While my mom paid all the bills sometimes, my dad took over the kitchen and cooked for us most days (and honestly, he was even better than mom at this). I grew up watching my parents split the housework according to what they liked and were good at, regardless of the predetermined gender roles in society.

And I can say that it gave me a sense of how exactly things should go around at home when it comes to chores, because let’s face it, no one really wants to do them in the first place.

I am saying this because we are in the lockdown and everyone is working from home and at home with no domestic help and it is now more than ever that we need to consider sharing the housework. After all, why should just one person be responsible for the kitchen duty and to go out to buy groceries, which is a fatal task these days, IMO.

If you are couple who fights over who will do the dishes or whose turn it is to make coffee, you are not alone. We are all in the same boat, whether it is fighting the deadly corona outside or fighting over chores inside. But we have a way out and it is sharing and splitting the chores.

Also Read: #Relationships: A Mother’s “Daal Manual” For Her Son Before His Wedding Is Going Viral. It’s Important That Men Have Basic Life Skills

Divide the chores according to skillset

You shouldn’t be expected to cook or make tea simply because you are a woman and because “a woman’s place is in the kitchen (and crap like that)” even if you are bad at it. Cooking is a basic life skill that everyone should know to simply survive. Sons and daughters both should be taught how to cook for themselves, there’s no discussion about that. And, he who likes to cook and is good at it, should do it.

An Indian mother’s daal menu recently went viral on Twitter where she had stuck different kinds of daals on a page with their names because he was getting married and he should know how to differentiate between the daals and also cook them, rather than expecting his new wife to do it for him.

In a recent interview, Twinkle Khanna also spilled beans on how things work at her house. She said, “My husband and son cook. They enjoy cooking. They put on some music and come up with fabulous dishes. I am the one who is awful at cooking. I like to organise things, I order groceries, wash utensils. Cooking is not my cup of tea. Every household should divide up chores according to people’s skill sets. Gender has nothing to do with it.”

Team up for the chores you hate

But what if you both hate a chore equally and you both aren’t good at it? Say laundry or doing dishes? If that’s the case with you, then it is better to team up and do it together. A while ago a Reddit thread asked users about green flags in their relationship and a woman responded saying she and her husband do the house chores they both hate together which actually helps them bond better and they argue less. Well, obviously. But jokes apart, I really think it is a great idea. I would rather prefer me and partner both be miserable and do messy chores together than doing it alone and then cursing him after.

This also reminds of the marketing stint by a detergent brand where they urged people to share the load and spilt responsibilities. It was a great campaign to clue in people, especially men, to chip in with the housework so that the women could give time to more important things like pursuing their interests and have some “me time.” Not to mention, bond over chores they both find taxing.

This is not just the lockdown thing but need to be followed through into post-Covid times as well. It’s so important for everyone to pitch in with the housework so that the burden doesn’t fall on just one person.

“This is something that has to extend beyond the time of crisis. And I think it will, because I see in my family that my partner understands how many things were just left to me — in terms of, let’s say, my daughter Nitara’s virtual classes or the house. Many people have realised that they need to step up and I think that is going to sustain,” said Twinkle Khanna.

We stan going fifty-fifty in with the kitchen and with dirty laundry work because that’s how it should be. Let’s break these gender stereotypes one chore at a time.

Also Read: Twinkle Khanna Shares A Picture Of Her Son Aarav Bhatia’s Meal And It’s So Fancy. We Can Only Make Instant Noodles!