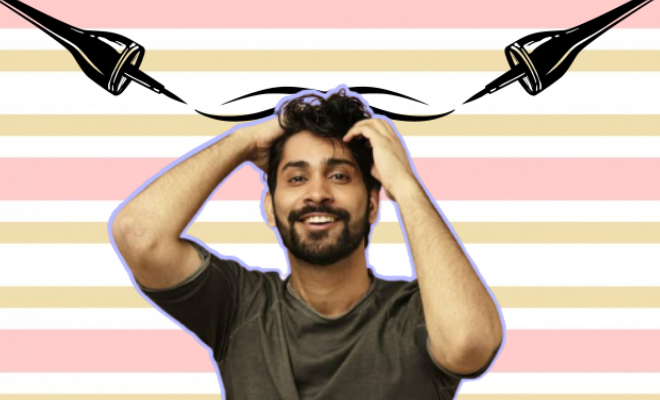 This Male Influencer’s Post About Wearing Eyeliner Has Internet Divided. It’s Not Path-Breaking But Let’s Not Dismiss The Dialogue Around It

Show me the book where it’s written that men shouldn’t wear makeup, I’ll wait. Never mind, you won’t find it. In fact, you won’t even find a book that says women should wear makeup. Because, you see that’s the thing. Makeup is a choice and it most certainly is not gender-specific. And while we are at it, let’s get one more thing clear. Makeup isn’t necessarily a tool to hide your insecurities and flaws. It could be a form of self-expression or an artwork or simply something that makes you feel confident.

A male influencer recently made a strong point about men wearing makeup when he put up a photo of himself sporting eyeliner. Ankush Bahuguna is an Instragrammer who regularly posts makeup tutorials, when he is not posting comic videos, and has established time and again that he loves wearing makeup. His recent eyeliner tutorial video, captioned “Can men wear eyeliner? Why the hell not?” sparked some debate in the comment section where some insecure men got nasty spewing unsolicited remarks and questioning his masculinity. He took to Twitter to post the photos of end result of his perfect eyeliner look (what even I can’t achieve) and put those haters in their place like a boss.

He wrote, “Just a man wearing eyeliner without giving a fuck about what others think. It’s not my eyeliner that scares you, it’s my freedom to wear it that scares you. You play by a rulebook and I don’t and that makes you insecure. This really isn’t about me, this is about you. :)” Netizens lauded him for his seriously impressive makeup skills and breaking the gender stereotypes, but there were some (probably those same men) who bashed him for simply being himself.

Just a man wearing eyeliner without giving a fuck about what others think. It's not my eyeliner that scares you, it's my freedom to wear it that scares you. You play by a rulebook and I don't and that makes you insecure. This really isn't about me, this is about you. 🙂 pic.twitter.com/U7tPMYhw0z

Some sensible men actually supported him. They praised him for not falling into the pit of gender-based norms and being vocal about liking something that’s not normally expected of men, which most men fail to do. A twitter user said, “This is just to appreciate @AnkushBahuguna for how he is breaking stereotypes. It’s rare to see people like you Ankush, and I really wish people change their thinking because of you! I won’t lie when I say he is the perfect role model.”

Some even pointed out that liner or kajal has been applied by men in our culture for years, so the massive backlash is actually pointless. A user commented, “I’m tired of South Asian millennials and Gen Z inventing problems only to pretend to be a progressive renegade. South Asian men wearing eyeliner is so entrenched in our culture that applying eyeliner to the groom is part of North Indian wedding custom.”

Women, like me, who struggle with working an even eyeliner even after doing it for around 5 years every day were all over his excellent liner skill. They couldn’t get over the fact how seamless he made the whole process of applying a liner look, apart from the fact that he broke the gender stereotypes and normalised men wearing makeup, of course. A user wrote, “Must say, many are just talk of the town. You literally nailed it on that video. Men go around asking for their rights. But then suddenly gets threatened when a man puts makeup?  Hypocrisy behaviour.” Another wrote, “You’re a gem, mate. Breaking gender barrier is what we want. Someone did break it when girls started wearing jeans and crop tops. Back then, People must’ve said bullshit to them too. YOU GO MATE.”

Also Read: Influencer Couple Offering Donor Sperm In An Instagram Giveaway Has Internet Divided. But It Will Mean So Much To A Couple In Need

Ankush keeps posting makeup tutorial videos on his Instagram account and serves pure goals by acing the looks. I love the fact that he’s so vocal about something that raises eyebrows in our society and he just doesn’t give two hoots about what anyone thinks. More often than not, non-binary and trans men fear being completely themselves and steer clear of these predetermined non-manly interests because of this same hate this cisgender man just witnessed.

I can’t seem to contemplate exactly what’s wrong with men wearing makeup? Does it make you any less of a man? Is that how fragile your masculinity is? I hate to say this but some women also commented mocking him for wearing eyeliner. That’s how deep-rooted these sexist norms are in our society. When are we going to get over it? I mean, it’s 2020 and we are not okay with women doing what they want, neither we are okay with men doing something out of the ordinary. So, how are we ever going to socially evolve and accept an individual’s choices? I know, by smashing gender stereotypes and normalising being unapologetically ourselves just like Ankush Bahuguna here.

Also Read: This Indian Fashion Blogger Asking For ‘Nominal Fees’ Of Rs1500 For A Session Of Talking And Positive Vibes Has Netizens Irate