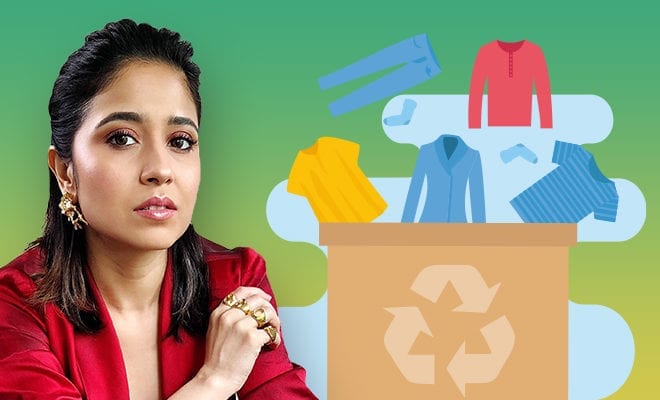 Being a celebrity means you’ll have a walk-in closet chock full of designer wear, a hundred pairs of shoes and superfluous handbags. As tempting as it sounds, it’s simply bad for the planet. Also, repeating clothes is apparently frowned upon in the glamour world (it becomes news when a celeb does) so they always have to add items to their wardrobes to keep their style game non-repetitive. But hoarding clothes and dumping them after using once amounts of heaps of textile waste. Some celebrities are thankfully more concerned about the environment than their fashion statement and are thus leading a sustainable way of life. From unabashedly repeating clothes to choosing preloved fashion, these celebrities follow ethical practices and encourage their fans to do the same as well. Shweta Tripathi just admitted to be an advocate for sustainable fashion and spilled the beans on how she makes sure that she does her bit.

In a recent interview, the Mirzapur star said, “I am a big advocate of sustainable fashion and I think if one is conscious of the environment, they’d always choose ethical clothing over anything else. Right from thrift stores to second-hand shopping, I’d like to encourage people to indulge in these practices and make a difference.” How do we know that these are not just words or a lip service but she actually believes in buying less and reusing what’s already there in her wardrobe? Here’s how.

For her upcoming thriller web series ‘Escaype Live’, Shweta Tripathi has worn her own footwear instead of asking her team to source or buy new ones that would probably go to waste once the shooting is done. She said, “For my character in Escaype Live, I’m wearing my own footwear as opposed to buying new ones because if there’s something that already fits, I think it’s really unnecessary to purchase new ones.”

We almost never see a celebrity repeating clothes whether it is their airport looks, red carpet looks or even their Instagram selfies. In real life, that doesn’t happen. We would gladly wear the same tee for 4-5 years until it begs us to leave it alone and we even find a way to repeat our occasion wear like wedding clothes in other ceremonies. However, celebrities who probably go through a change of clothes a dozen times in a day are expected to never be seen in the same outfit. All these fancy clothes they use for shoots and events are seldom seen ever again on screen.

Celebrities influence people big time and it’s no secret that their fans and followers imitate their lifestyle. If these stars would support and set an example for ethical fashion by reusing clothes, shopping from thrift stores and opting for preloved styles, people will follow suit. And, considering the amount the entertainment industry accounts for garment disposal, this is what every celebrity should be adopting.

Shweta is game, already. She wants this to become a norm in the film industry, especially for shoots. She said, “The problem is that everyone thinks someone else will save the world. It’s time to be that someone. If we all do our little bit, the world will be in a better place. I’d also like to tell people that even when it comes to sourcing for shoots, we try our best to cut down on new things.” We totally agree.

Also Read: Sushmita Sen Said She Repeats Clothes And It’s The Most Relatable Thing We’ve Heard From A Celebrity. PS, More Celebs Need To Normalise This