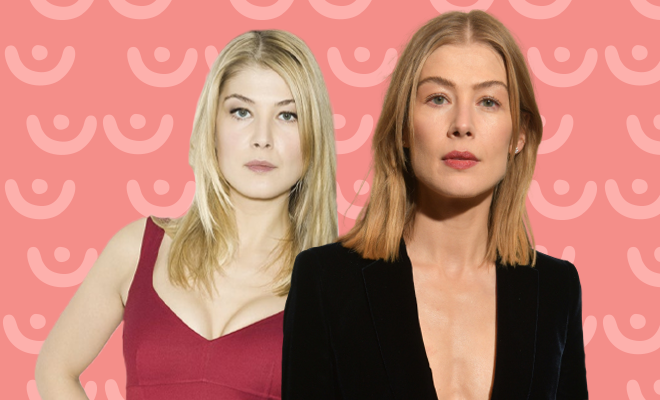 I (and a lot of film buffs) care a lot about Rosamund Pike as the talented actress, who has managed to stun and scare us with her range, from playing the demure Jane Bennett in Pride & Prejudice to the sociopathic wife Amy Dunne in Gone Girl. The English actress just today won her first ever Golden Globe for Best Actress — Motion Picture Comedy or Musical for her playing the ruthless Marla Grayson in I Care A Lot. And yet, what some people actually care a lot about, even in this time and age, is how an actress looks on a movie poster. Mainly, (and excuse the crassness of this expression) when it comes to actress, the only globes that matter are, well…. Take this poster for the film Johnny English Reborn, for example, that Pike has decided to call out for digitally altering her appearance, without her approval.

The 2011 film starred Mr. Bean actor Rowan Atkinson, with Rosamund Pike playing his love interest. On the poster, the actress is posing next to a very Bond-looking Atkinson, in a red dress, with ample of cleavage visible. Which would’ve been perfectly fine, except that’s really not how Pike looked when the picture was taken. The makers airbrushed her picture and digitally augmenting her breasts to make them pop, without her permission.

The actress spoke at length about this airbrushing that happens quite a lot in the industry during her appearance on The Kelly Clarkson Show, where she was promoting her film I Care A Lot. She said, “For the poster for Johnny English, my breasts were augmented. In the poster for the character shot, I’ve got a really impressive chest. Which I don’t have.”

Not surprising, since the world seems to be obsessed with women’s bosoms. Thanks to the impossible beauty standards that we all are compelled to cater to, every woman feels like she needs to have the perfect ‘rack’. And sure, we’re all the ‘filter’ generation that loves to enhance our appearances using as many digital tools as possible, but doing this to someone else’s pictures without their permission has to count as problematic, TBH.

Last year, Pike had revealed in an interview that she got the poster for one of her films taken down because they had enhanced her breasts in the image. However, it is not that she has revealed that it was most probably the Johnny English sequel that she was talking about.

Tuns out, this isn’t the only time Rosamund Pike had her appearance altered for a film poster. In her recent movie, Radioactive (2020), where she plays the late Nobel Prize winning physicist Marie Curie, the colour of eyes was digitally changed from blue to this brown/hazel colour.

“For Radioactive strangely, they made my eyes brown, and I still don’t quite know why. A sort of browny, hazel colour. Then I was thinking about it – those are the obvious times, right? When you do notice, ‘Oh, I’ve got brown eyes’ or, ‘I’ve got massive breasts’.”

She further told Kelly Clarkson how these are just few instances where she did notice that her appearance was altered in the film’s artwork. Sometimes, that enlightenment doesn’t even happen, because thanks to an increasingly filtered and made-up world, we’re all clearly forgetting what we actually look like. And none more so than celebrities.

Pike spoke to Clarkson of the time she found out about the Face Tune app that makes these things possible. “I was on a flight with this guy, someone I didn’t know, and I took a selfie, he looked over my shoulder and he said, ‘No no, you have got to FaceTune that.’ And I said, ‘Sorry what?’ He said, ‘You’ve got to FaceTune that’. That was my introduction to face-tuning, which has often happened, and body tuning.’

Airbrushing or photoshopping actors’ bodies on magazine covers and movie posters has become such a norm now. It’s ironic that, where at one side we are advocating for keeping things real and authentic, on the other side, we condone such tactics from an unapologetically vain industry. Actors are more than their bodies, and while we say that permission is the operative word here, what’s really important is that we do away with the idea that men need to have a certain physique or women need to look a certain way to be appealing. This is another argument against the ‘male gaze’ which is something we’ve been catering to all this time, but no more.