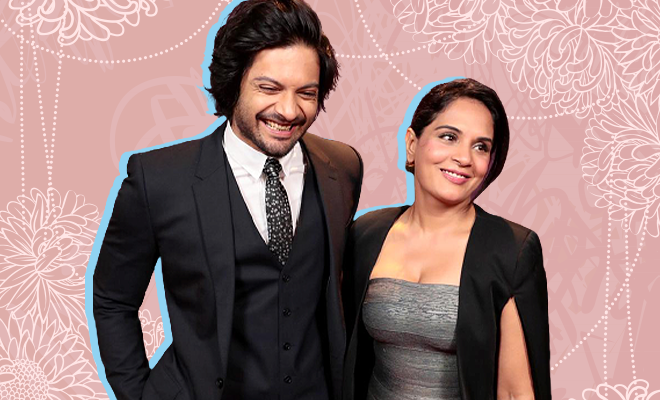 Richa Chadha Feels Sorry For The ‘Loveless People’ Who Bashed The Tanishq’s Interfaith Commercial, Says Her Life Is Like That Ad.

Unless you’ve been living under a rock, you’d know about the Tanishq ad that showed an interfaith baby shower which was apparently too offensive for some people who accused the ad for promoting love jihad. It sparked difference of opinions on social media last week to an extent that the brand had to take it down. However, the ad hit home for several interfaith couples who thought it was beautiful and found the outrage nonsensical. One of them was actor Richa Chadha who’s been in a relationship with Ali Fazal for five years now and says her life is like the Tanishq ad.

She had retweeted a copy of the ad on her Twitter after it was pulled down saying, “It’s a beautiful ad.” Recently, in an interview with Mumbai Mirror, she said, “My life is like that ad. I’ve got so much love from Ali’s family, and he from mine. I feel sorry for those loveless people who have a problem with someone else’s marital choices.” She is right. How does the decision of two adults getting married become a state of contention for those who don’t even know them? “In our country, the freedom to choose our life partner is enshrined in the Special Marriages Act,” she added.

The intense backlash for an emotional ad that attempts to send out an optimistic message about religious harmony gave us a glimpse of the rising intolerance in our country. And the fact that even a leading jewellery brand bent to the hate and trolls and had to withdraw its ad shows how scary it could be for real people in an interfaith relationship in India, even in 2020.

Also Read: This Ad Showing Hindu-Muslim Harmony Was Taken Off After Trolls Accused The Brand Of Glorifying Love Jihad. What Have We Turned Into?

The hate didn’t stop even after the ad was pulled down and it extended to anyone and everyone who came in support. After the Tanishq controversy, a Muslim girl from Pune shared pictures of her own interfaith marriage to a Hindu man in support of the sentiments of the ad on her social media. In turn, she got abuses, threats and hate hurled at her and her family so much so that she had to report the online bullying with the cyber cell. Even her phone number and address were leaked on the social media. Forget religious harmony, whatever happened to freedom of speech? We are officially living in a country where even fundamental rights are controlled by a bunch of online bigots.

You might think celebrities like Richa Chadha and Kareena Kapoor are able to dodge the toxicity and could afford to break the so-called laws of love but it is not that easy. Richa has been on the receiving end of death threats and lewd comments for dating Ali Fazal in the past. She responded to the tweets saying “Hey tweeps! Don’t care about the targeted abuse because there’s a lot of unemployment in the country rn, if someone needs to work for ₹10 per tweet, I don’t judge them. But RAPE AND MURDER threats? Come on @TwitterIndia @Twitter.” After which, Swara Bhaskar, Farhan Akhtar and Pooja Bhatt also came in support of the actress. Although the couple was all set to tie the knot in April this year, they had to postpone the nuptials in the wake of nationwide lockdown and health crisis.

There are millions of people in India who live in persistent fear, get death and rape threats and are even killed for merely loving someone who’s religious belief differs from theirs. This is not new in our and hundreds of couples become victim of such hatred and irreversible, dire consequences thereof every day and some even end up losing their lives just because they dared to love outside of their faith.

The severe backlash for the ad says more than just the intolerance of people online. It shows how religious fascism has seeped into our society so effortlessly that even the biggest brands have to succumb to the social pressure. Where does that leave helpless individuals who don’t even have the backing of their own families when interfaith love is concerned? Religious differences have been prevalent in our country for decades now (it was partitioned on the same grounds), but this, now seems to be a particularly dangerous time to be in interfaith love, if not otherwise.

Also Read: Dear Kangana Ranaut, The Tanishq Ad Is Certainly Not Sexist And Your Attempts At Staying Relevant Are Getting Boring