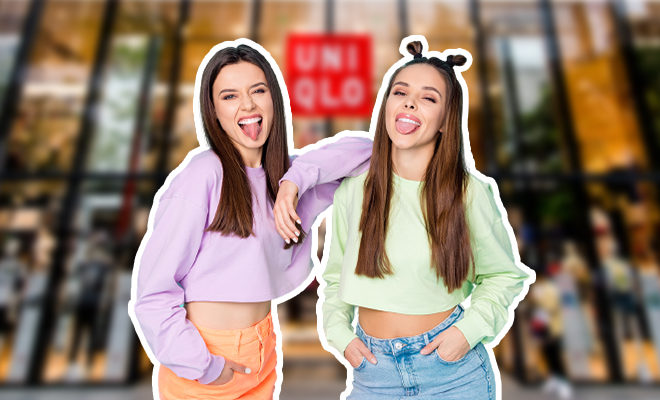 Wouldn’t it be great if viral challenges were all positive and the only effect they had was helping people? You know, like those donation challenges, or even something as adorable and wholesome as the What The Fluff challenge with pet doggos! Alas, with every new social media platform gaining popularity, newer challenges that can actually be pretty dangerous or hazardous to one’s mental health are emerging. In China, a country already obsessed with the unrealistic Western beauty standards of thin and fair, a new challenge has gone viral on social media platform Weibo. It involves grown, adult women going to Uniqlo stores and trying on clothes… from the children’s section. Yeah, no kidding.

According to the New York Times, the hashtag “Adult tries on Uniqlo children’s clothing” on the Chinese social media platform Weibo has been viewed some 680 million times. This viral trend is being labelled as a new iteration of the BM Style. What is that, you ask? Well, the ‘BM’ stands for Brandy Melville, a cult Italian fashion brand by Silvio Marsen that has a ‘one size fits all’ clothing targeted at teenage girls. The brand has been, on occasion, called out for promoting unhealthy body standards, because it carries only one size (extra-small) in its stores.

A lot of Chinese bloggers have been posting themselves trying on Uniqlo’s, which is a Japanese brand) children’s clothing, as part of this challenge, raising concerns amongst experts about unhealthy body image ideas amongst adult women. A situation that is already quite worse in China.

The China Marketing Insights Magazine reports that on Xiaohongshu, which is a popular women’s social media platform in China, there are “over 140,000 posts about ‘BM style’, with tips on how to put together a BM style outfit….and over 5,000 posts about creating BM outfits with Uniqlo clothing.”

However, what is perhaps equally worse from a business perspective is that these women, in the process of trying on clothes that are several sizes smaller, are stretching them out. This is reportedly rendering these items of clothing unsuitable for purchase by customers who actually want to buy children’s clothing. Furthermore, many of them leave makeup stains, etc. on the items, once again damaging them and making them unsellable. While NYT reports that Uniqlo has not yet made a comment, Thats’s Mag reports that some stories insist customers size up before they go into trial rooms. However, many attendants, fearing complaints, don’t enforce this rule all the time.

Clearly, stopping such intensely viral social media trends is not an easy job because it’s not just about physically prohibiting these women from trying on children’s clothing but also making them realise that it can damage their mental health by messing up their self-image.

Even then, Uniqlo has put in some rules in place. According to i-D, some of the brand’s stores have banned adults from trying on children’s clothing. On Xiaohongshu, the above mentioned social media app, when women search for the brand’s kids clothing, a banner appears on top appealing to people’s decency and asking them to be respectful of the brand and choose the right size before they try product.

In response, some Uniqlo stores have banned adults from trying on children’s clothing, while others have simply appealed to their customer’s decency. More widely, on Xiaohongshu, under the search term, ‘Uniqlo kids clothing’, there’s now a banner at the top of the page asking people to be respectful and choose the correct size when trying out products at the store.

This is highly problematic, and honestly an escalation of things like that A4 challenge where women posed behind an A4 size sheet to flaunt their thin waste sizes. The obsession with thinness seems to be so ingrained in young women, especially in China. I wouldn’t be surprised if the the next challenge is something harmful. Here’s hoping more stringent measures are taken to control this trend.