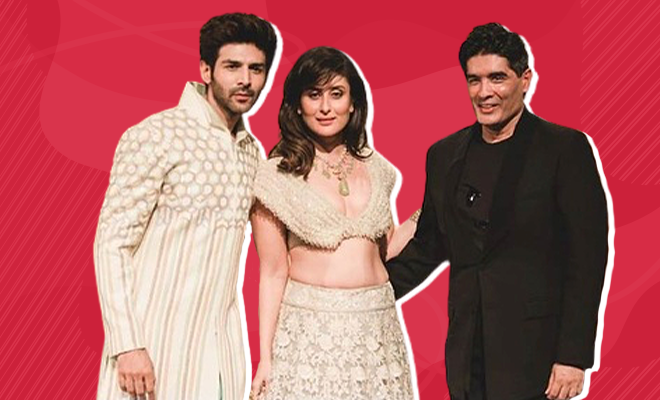 Manish Malhotra Defends Showstopper Culture, Says It Isn’t A Strategy For Him. But Celebs Stealing The Limelight From Designers Shouldn’t Be The Norm

The world of fashion is highly dominated by its sister industry—showbiz. It stands true around the globe but the impact of film industry on fashion is very disturbingly prominent in India. You cannot separate Bollywood and fashion and the reason might be the inclusion of film celebrities in every fashion event, shows and brand representation. It’s understandable since in India, Bollywood sells. Whether it is an event you want to publicise or market a product or even need to make the masses aware of a social cause, all you need to do is put the face of a Bollywood celebrity on the billboard and half your job is done.

Their presence is so impactful that it sometimes takes the spotlight from the main purpose and it all becomes about nothing but their star status. This is essentially true for fashion shows where it has become the norm for designers to culminate their shows with a celebrity strutting down the runway. There was a time when fashion shows strictly focused on the clothes and the designer until one day, in an attempt to popularise the show and the collection, the trend of bringing in a celebrity to walk in the best outfit picked up. Yes, we are talking about celebrity showstopper culture that is still going strong.

Ace designer Manish Malhotra admitted to have brought the concept of showstoppers and the numero uno of the industry in the front rows seats and has been on the receiving end of criticism for the same. In a recent interview, he defended the showstopper culture saying it is an organic practise for him, rather than being a strategy. He said, “It was all organic for me, I am working with Urmila in a film, so I can invite her to be a showstopper in my fashion show or I am working with other actors, so I’m inviting them for fashion shows. So for me, it’s not a strategy, it’s all been organic and flows from the heart.”

While we are sure it isn’t a publicity propaganda for him mainly because he is the last person in the industry to be needing that, we are not in support of the showstopper culture. Celebrities overshadow the clothes and steal the spotlight from the designers which is not fair to anyone. And we aren’t here for Bollywood stealing spotlight from the models, clothes and, more importantly, the craft.

#throwback @fdci #coutureweek #delhi #finaleshow at @theleelapalacenewdelhi and the gorgeous @aishwaryaraibachchan_arb who had High Fever and yet flew to Delhi for the the show and looked stunning as always and walked the show making it a memorable moment for me .. This colour was a Risk as it was a deep beautiful mix of Bordeux and Dark Brown but I remember many brides ordered this for their wedding day or their receptions and it got accepted in a big way with all the young brides and I love to work with different colours ..#design #colour #love #aishwaryaraibachchan #flashback #memoriesforlife #quarantine #stayhome #staysafe #staypositive @mmalhotraworld

Also Read: At LFW, Designers Discussed Celebrity Show Stoppers And How It Ruins The Show. We Certainly Agree That Designers Deserve The Limelight!

In the past few years, this showstopper culture has been massively criticised as a big celebrity ends up taking away the limelight from the art which nullifies the whole purpose of a fashion week. On international runways you rarely see celebrity showstoppers and the designer and the collection is the only thing that’s talked about. Over there, celebrities glide on where they belong—on red carpets of movie events. This is something we should actually take away from the West.

Talking about the criticism, Manish Malhotra said, “Today, it’s (showstoppers) become a norm. You like it or not there are showstoppers, front rows… every designer in the country is wishing for a film star to wear their garments, in a wedding or anywhere, so I think that when you go with your conviction, then it’s organic, you continue to work and one day, it becomes a norm. So there’s rejection and there’s non-acceptance, but there’s no sunshine without darkness.” It’s true that it has somehow become the reality in fashion world but that doesn’t mean celebrities don’t ruin the show by hogging the limelight off of designers’ work.

The norm of having a celebrity showstopper in the shows may have sprouted from innocent obligations and genuine friendships but it has become a serious problem in fashion. Now a fashion show isn’t deemed successful or interesting if the designer hasn’t cast a high-profile celebrity to showcase their collection. The studio is filled with anticipation about who’s walking the show and who’s in attendance. It is so unfair to the designers who’s shows lack a celebrity showstopper for whatever reason. After all, shouldn’t clothes be the real spotlight stealers?

It’s sad to see that the Indian fashion industry has a showstopper syndrome to an extent that rather than the collection and craft, the audiences are more interested in celebrities walking down the runway who didn’t have any contribution to the collection. We feel that established designers like Manish Malhotra have the power to singlehandedly bring in a change by modifying this trend and making clothes the showstopper. It will be great not only for the modelling industry, the craft and the clothes but also for the upcoming designers who won’t have to worry about putting in big bucks on celebrities to make their show a success. And this year has shown us that that is possible.

Also Read: As Designers Abandon Celebrity Showstoppers, Models, Clothes And The Craft Gets The Spotlight On Virtual Runways. About Time