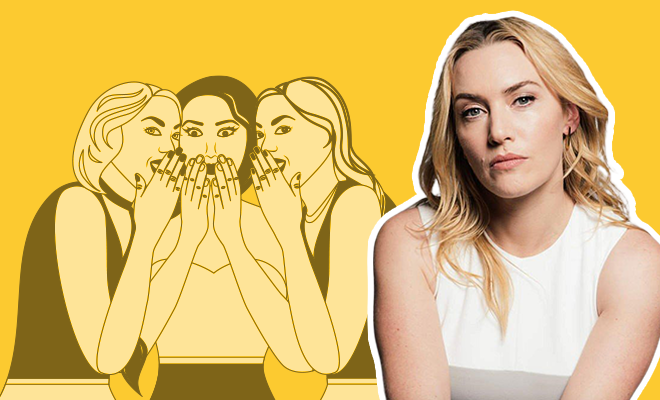 Kate Winslet Opened Up About Being Scrutinized For Her Weight In Her 20s. She Said It Damaged Her Confidence And Her Perception Of Beauty.

Thanks to decades of patriarchy and oppression, we have a very skewed perception of beauty. Most people would define a beautiful woman as thin, tall, slender with long and luscious hair. It’s not even their fault. Years and years of classical conditioning has led them to this perception. What these people fail to realize though, is that beauty is not limited to these stereotypes and that weight is merely a number on a weighing scale. That being said, at some point, every woman has been made to feel insecure or conscious about her looks or her weight or the fact that her skin is two shades too dark. It’s just the way of the world. And it’s not just us, even women like beauty icons Kate Winslet have been made to feel less than confident about themselves. We are glad she didn’t let that hold her back though!

In a recent interview with The Guardian, Kate Winslet revealed that when she was just starting out in films, she was bullied about her weight. The Titanic star said that her confidence was shaken because of all the negative stories being published about her in tabloids. And when she started defending herself, she was labelled as being too outspoken. And that’s one quality, people believe, that no woman should have, isn’t it? Especially an actress. Rubbish stereotypes.

Kate Winslet told The Guardian, “In my 20s, people would talk about my weight a lot. And I would be called to comment on my physical self. Well, then I got this label of being ballsy and outspoken. No, I was just defending myself.”

The criticism from British newspapers was so harsh, it made the Oscar-winning actor feel reluctant about going to Hollywoodhttps://t.co/5yfa1AFqyb

When Kate Winslet starred in Titanic she was merely 21-years-old. However, ever since she was 19, tabloids have been commenting on her weight and published cruel stories about her appearance. Kate said, “It was almost laughable how shocking, how critical, how straight-up cruel tabloid journalists were to me. I was still figuring out who the hell I bloody well was! They would comment on my size, they’d estimate what I weighed, they’d print the supposed diet I was on. It was critical and horrible and so upsetting to read.”

I have never been more glad that we’re over the whole tabloids culture. Granted we haven’t moved very far, but at least publications think twice now before commenting on an actress’ weight. In Bollywood and Hollywood, both. That being said, we still judge and scrutinize actresses based on their weight and appearance without giving even a second thought to how it must be making them feel. It’s cruel and unfair, to say the least. All these negative articles and mean remarks about her weight in British newspapers almost made Kate Winslet not want to come to Hollywood. She was afraid of the things they would say about her there. What a shame it would’ve been if she hadn’t given into that fear!

Kate Winslet's confidence was 'damaged' after cruel jibes about her weight in her 20shttps://t.co/h041Uv2aIZ pic.twitter.com/cT11fftldT

Kate said in the interview, “It damaged my confidence. I didn’t want to go to Hollywood because I remember thinking: ‘God, if this is what they’re saying to me in England, then what will happen when I get there?’” She added that all that negative attention impacted her sense of what is beautiful and that made her feel very alone. A lot of people will be able to relate to her right now, I know I can.

We are glad Kate Winslet opened up about being bullied about her weight and criticized because of her appearance. All over the world, beauty standards are very similar. In the sense that they are all highly unrealistic. And even though Kate is talking about a time decades ago, we haven’t moved that much further. Besides, celebrity or not, we need to stop scrutinizing people based on their appearance. Why can’t we normalise women with curves and stretch marks? We are tired of trying to fit into society’s impossible beauty moulds, it’s time for real women to be celebrated.

Tamannaah Bhatia Was Trolled For Gaining Weight While Being COVID+. We’re Judging People When They Are Sick Also?