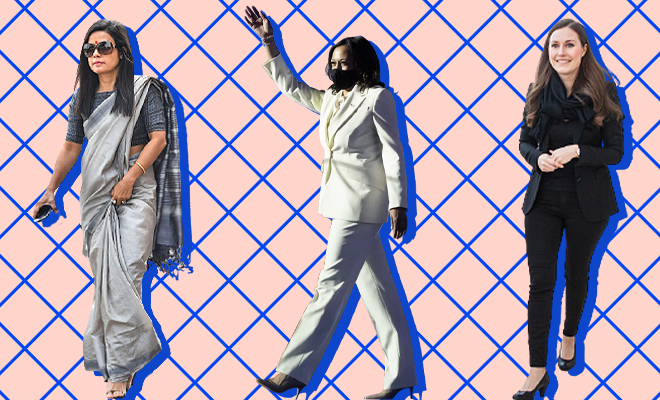 From Kamala Harris To Mahua Moitra: How Women Politicians Use Power Dressing To Make A Statement

Fashion is a powerful tool to express what you think and feel without having to say it. Although not all your wardrobe picks give out a specific message (other than maybe your sweats telling how you’ve given up on life), you could actually communicate with your choice of clothing. We have seen so many instances where fashion spoke of power play. And the women in politics know how to use this powerful tool in the most subtle way. A politician choosing to be clad in symbolic clothing that holds an influential shade to it isn’t new. Women leaders have been doing it since time immemorial. The latest one being the Vice President-elect of USA, Kamala Harris.

As the first woman Vice President-Elect, Kamala Harris wore the iconic white suffragette pantsuit during her acceptance speech and her first public appearance post victory yesterday. The fashion piece had a history-making moment. During her vice-presidential race, she always made an appearance in pantsuits, often in deep colours like blue and black, but she chose white which had a patriotic meaning to it. The colour has often been used as a medium to pay tribute to the women suffrages who marched and campaigned for the right to vote. The white suffragette pantsuit has been worn by many American female politicians including Hillary Clinton and Nancy Pelosi in the past years.

For her victory speech last night, the US’s new VP-Elect @KamalaHarris wore a white pantsuit by Venezuelan designer (and generations-long family friend) Carolina Herrera @HouseofHerrera. It’s a notable nod to Venezuelan women, who suffer so much under Maduro’s dictatorship. https://t.co/fSesRNkXGV

Not just Kamala Harris, but women politicians around the world have demonstrated their power play through fashion. We all know the most stylish politician, Hilary Clinton’s penchant for power suits that she probably owns in every colour on the shade chart. She is rarely seen in any other outfit and deems the three-piece suit to be the most professional uniform. She also said that it makes it easy for her to fit right into the highly male-dominated field. And more importantly, it would take away from what she wearing and let people focus on what she’s saying. She calls wearing pantsuits an “anti-distraction technique.”

In India, the conspicuous uniform for women politicians is the powerful, formal Indian wear, the saree. We have female politicians who are always clad in crisp and elegant cotton sarees like Mahua Moitra, Raksha Khadse and Priyanka Gandhi, and their impeccable style statement is as influential as their voices among the hundreds of male politicians. In fact, Textile Minister Smriti Irani is always spotted in handwoven cotton sarees to promote the handloom campaign and encourage women everywhere to opt for handloom sarees. She showed her support to the local artisans and weavers through her draping and that’s how you use fashion to speak for you.

Smriti Irani’s sense of draping speaks a lot about the current Textiles and Information & Broadcasting Minister’s acting days. Her sarees are bold, vibrant, and unlike what most female politicians would wear.#WomenInPower #Saree #PowerfulIndianWomen #HindSadiCentreAndCreations pic.twitter.com/NCyUy51gPz

However, it’s not all rainbows and unicorns for women politicians. Something as minuscule and harmless as clothing also invites scrutiny and they often have to face unfair criticism which ultimately culminates into fingers pointed at their credibility as a leader.

Society is obsessed with women’s clothes regardless of what field of work they belong to and politics is no different. In fact, strangely, this is one field where a woman’s credibility as a leader is defined and demeaned in accordance to her clothes. Often, the sartorial choices of women politicians are on keen watch and they are judged on the basis of what they wear, while men are hardly even judged on their potential.

Recently, the Finnish Prime Minister Sanna Marin faced backlash on social media by the self-proclaimed moral police for wearing a low-cut blazer for a magazine photoshoot. It was deemed inappropriate for a female leader to pose in an unconventional attire and people took offence. However, the Finnish women and men boldly rallied behind their PM and posed in similar outfit to back her choice of clothing.

Another incident where a female politician was slammed for her clothes was not too far but closer home in India. The two young newly elected MPs Nusrat Jahan and Mimi Chakraborty were shamed for wearing western outfits in front of the Parliament last year. Their outfits were formal and unrevealing but not Indian enough to be deemed appropriate. So the moral police on social media attacked them for dressing up objectionably. This categorically happens to women leaders while men’s clothing grab much less attention.

Be it in a saree like Mahua Moitra, a pantsuit like Kamala Harris, or a western outfit that may seem informal to some, these women are breaking, nay, smashing the ceiling and paving a path for other women in a field that was once a man’s domain. Plus, they are wielding fashion to empower, support and express and we love that about them. The women politicians are dressing up in their powerful glory, voicing their opinions and bringing in change in a place where the representation of women is so low that it often makes them an easy target to judge and criticise. But it’s not breaking them and bringing them down because power dressing is just a tool. It’s really their position that speaks for them.

Also Read: Finnish Women Pose in Low-Cut Jackets To Back Their PM After She Was Called Out For Wearing A Similar Blazer For A Fashion Magazine. What A Cool Move!