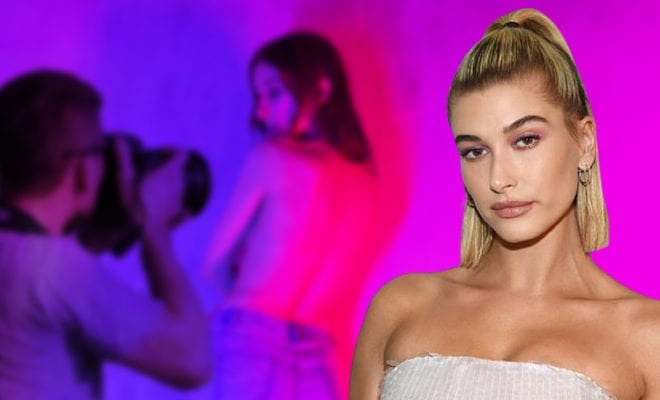 Hailey Bieber Reveals The Reason She Won’t Ever Pose In the Nude, And How Religious Fans Can Be So Judgemental

It’s sad that religion has become less about living one’s life by a code and channelling faith in a higher power and more about fighting on whose religion and God is better. And the other thing about religion that most people who blindly follow it, which would include some of our own families and friends, is that it cannot be forced. It has to be something that comes from within. While the younger generations are usually seen by the older ones as being utter heathens and not caring about religion or labels, the fact is that many of them are selectively religious and spiritual. And it’s actually quite good because they pick and choose the edicts from their religion that they are comfortable following because it makes their life better and strengthens their faith, and ditch the ones they deem regressive. Take Hailey Bieber, for example, who during a recent interview, revealed a thing or two about her own faith, and how she would never pose in the nude.

The 24-year-old model, who is married to Justin Bieber, was speaking to actress Yvonne Orji, of the series Insecure fame, on faith, sex and their relationship with God, in a video that is now up on Hailey’s YouTube channel. Both Hailey Bieber and Yvonne Orji are outspoken about their beliefs in Christianity, and they spoke about how often their personal and professional decisions cause them to be labelled as bad Christians. For example, in 2019, when Hailey asked her social media followers for Halloween costume ideas, she was criticised as being un-Christian for celebrating the holiday.

Also Read: Hailey Bieber’s Wedding Gown Was Made By A Friend And Took Only 3 Fittings To Be This Perfect

The two talked about how, in both their professions as actor and model, they have to do certain things that might be deemed un-Christian. Orji stars in  HBO’s Insecure, a series where she might have to enact a sex scene or two on screen. And Hailey Bieber, being a model, often poses in lingerie for photoshoots.

Hailey told Orji, “You’re an actress. You’re on this show where you are doing sex scenes and cursing and doing things that a lot of people who are Christian would probably see that and be like, ‘Oh, well you’re not a real Christian, because you’re doing sex scenes and you’re doing this.’ In a similar way sometimes, like for my job, I have to show skin or I’ll get photographed in underwear or lingerie. And people are like, ‘Well that’s not a good representation because you’re not modest and you’re not this’.”

It is in the course of this conversation that Hailey Bieber revealed why, even though she does show skin while posing in lingerie for work, she won’t ever go nude. It was unclear whether the reason for this was explicitly her religious beliefs or something else, but she did make it clear that while this is her personal belief, she doesn’t judge anyone else who chooses to go naked.

And really, isn’t that what religion and belief in God ought to be about. To each their own!

It is unfortunate that fans and their fellow professionals don’t always understand this distinction. And often, because of the rigid perceptions of people around them, their’s fear of judgement and more. Yvonne Orji told Hailey, “I had been telling [executives] all season, ‘Y’all know I can’t show my areola’ … I also knew I couldn’t go in there and be like, ‘I’m a Christian, I love Jesus’.” Why? Because she was afraid that she might be recast.

But Hailey Bieber called out the judgemental behaviour amongst fans, who often comment on her social media. “I’ve met Christian people that are just super-judgmental and made me feel like I’m a bad person because I don’t live my life the way they think I should live my life and I felt weird about posting certain photos of myself, for feeling like people in the church are going to see this. Am I doing something? Am I setting a bad example? And the reality is, no.”

“Your relationship with God is not going to be the same as mine. We all have different relationships and ways that we relate to the Bible and relate to Jesus.”

Preach, Hailey Bieber! Religion being used to control what women can and cannot do with their bodies is one practice that needs to be dispelled right away. People need to understand that these religious codes and rules, religion and the concept of God in itself, are all man-made and are supposed to give our lives some semblance of a higher purpose. But if they end up making us unhappy and constricting our existence, then what’s even the point?