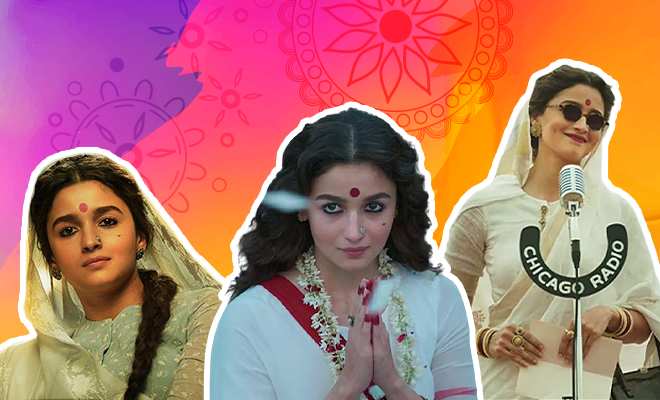 It’s actually been a while since we saw Alia Bhatt on the big screen. And no Sadak 2 doesn’t count because, for one, it was an OTT release. And two, it didn’t do justice to the immensely talented actor that she is. What Alia fans needed is a Brahmastra that would reawaken their admiration for her. Alas, that’s going to be a while, but Aloo has not left us high and dry, no ma’am. We finally have not just the poster but also the first official teaser of her film Gangubai Kathiawadi, which is directed by Sanjay Leela Bhansali!

February 24 happens to be filmmaker Sanjay Leela Bhansali’s birthday. And it seemed a good day to drop the poster of the highly anticipated film, which is based on a chapter of the book Mafia Queens of Mumbai by author Hussain Zaidi. In the titular role is Alia Bhatt, who plays Gangubai Kathiawadi, based on Gangubai Kothewali, a madam of a brothel in Kamathipura, the famous red light area in Mumbai. And the poster did not disappoint!

Decked in Indian wear, with her hair in a long plait, a big red bindi on her forehead, a nose ring, and her jut clad foot propped up in style on a chair, Alia Bhatt radiated swagger and power.

No wonder, she was getting rave reviews from everyone, including peers like Katrina Kaif, Jacqueline Fernandes, Ranveer Singh, Zoya Akhtar, Huma Qureshi and so on.

Also Read: 5 Thoughts I Had About Netflix’s ‘Bombay Begums’ Trailer: Pooja Bhatt And The Begums Exude Power And We’re So Ready

Initially there were rumours that a teaser for the film was expected sometime tomorrow. But since it is the director’s birthday today, a surprise trailer drop sounds like the perfect way to make the day special, no? Alia Bhatt shared the teaser, with a message for Sanjay Leela Bhansali, saying she couldn’t think of a better way to celebrate SLB than with this first look at their labour of love. This is their first collaboration.

The teaser is nothing short of goosebump-inducing! It has all the opulence of a Sanjay Leela Bhansali film, and Alia Bhatt fits right into it. In fact, while Alia against those period sets might actually remind you of Kalank! But the first time she turns to the camera reminded me so much of Deepika Padukone from Goliyon Ki Rasleela Ram Leela!

But keep watching and you could even see a lot of Abhishek Bachchan from Guru. Alia has caught the Gujju accent well, and her every look radiates self-assuredness and power. If you loved Alia as Safeena in Gully Boy, where her character’s aggression was more physical, you’re going to see that aggression shift to her eyes in Gangubai Kathiawadi.

This is clearly something we’ve not seen Alia Bhatt do before, and I am excited to see what she brings to this role, and what this role does for her career. Plus, it is SLB, and we know he does have a knack for creating the most fascinating worlds and rich, layered characters on screen. I am so excited for the trailer and the film!

Gangubai Kathiawadi will release on July 30, 2021.

Alia Bhatt, Deepika Padukone And Katrina Kaif Swear By Pilates. Here’s Why You Should Try It Too!