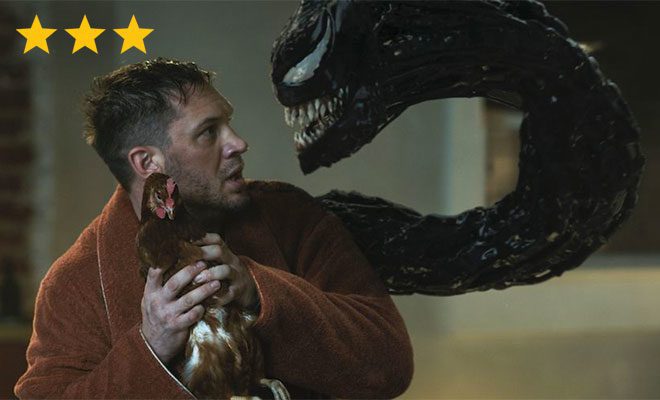 ‘Venom: Let There Be Carnage’ Review: I’m Just Here For The Love Story Between Eddie Brock And Venom

I’ve missed cinema halls so much, that ever fibre in my being sheds tears of joy when I step into one. And what better than to watch a superhero movie, with the whole shebang, and particularly one that promises carnage, to have this experience, right? It definitely classifies as one of those films you’d better watch on the big screen for the experience. But see here, after watching Venom: Let There Be Carnage, or Venom 2, all I can say is, I think in my heart of hearts, I am just in it for Eddie Brock and Venom’s relationship, which is a love story and I will hear no different, thank you very much. Venom: Let There Be Carnage stars Tom Hardy, Michelle Williams, Reid Scott, Stephen Graham, Peggy Lu, Naomi Harris and Woody Harrelson.

It is directed by Andy Serkis, who knows quite a bit about co-dependent love stories, having played Gollum who is in love with his Precious in LOTR for so long. Oh and one of the writers on board is Tom Hardy himself. Cool, eh?

Those who sat for the mid-credits scene of the 2018 Venom already knew that we were getting Cletus Kasady aka Carnage as the villain. The film begins with a look into the deeply tragic origin story of our villain, a childhood spent in darkness with just one bright light, that gets taken away from him. In the present, Kasady, on death row, asks for Eddie Brock to interview him and tell his life story. Meanwhile, a frustrated Eddie and an even more frustrated Venom are having couple problems, which causes an incident at the prison, thereby setting up the stage for Kasady to become Carnage. And then the villainous shenanigans begin!

Now casting someone like Woody Harrelson, who like Serkis, really knows how to use his face to play the crazy bad guy convincingly, was a brilliant idea surely. The film also gives him and Harris massive CGI set pieces to wreck the titular carnage, and it is all a very loud, very old-school comic book movie villain-y grand. This makes me even more glad that I watched the movie in the theatres, because I could truly appreciate it all. However, I am still unsure if stripping the narrative to its bare minimum was a good idea or not. On the one hand, Venom: Let There Be Carnage sticks to a very limited cast, keeping this to the point, and not dawdling anywhere. On the other hand, I wonder if a little more layers could’ve been good.

One thing is for sure though, I am absolutely on board the Eddie and Venom bromance express. The old married couple dynamic between the journalist and the symbiote is at an all time high in the sequel, and it is hilarious! Tom Hardy gets ample of moments to really flex that physical acting, and he delivers every single time. And if you peel back all the Carnage and the Anne track and every thing else, you’d realise, we’re all really just here for Tom Hardy’s Eddie and his sweet, sweet friendship with Venom. Yeah, sweet. Like chocolate.

I would love to tell you my favourite scene, but we hate spoilers, so just keep an eye out for a couple’s fight and everything that comes after. And of course, the mid-credits scene, which if you’ve managed to dodge the spoilers about it on the Internet, you’re going to love.

Look now, I, personally, had fun. Venom: Let There Be Carnage is actually a pretty decent outing for the fans of Tom Hardy and the film franchise, who get to see some more of Eddie being Eddie and Venom being Venom, but somehow both growing and maturing as individuals and as a couple. Woody Harrelson is great as Carnage, and there’s a lot of spectacle in here to satisfy your CBM fan. However, it’s a threadbare plot, which doesn’t try to delve deeper, which might disappoint the comic book fans who know that there’s way more to the characters in the books than the movies deign to explore.

Venom: Let There Be Carnage released in cinemas in India on October 14, 2021.