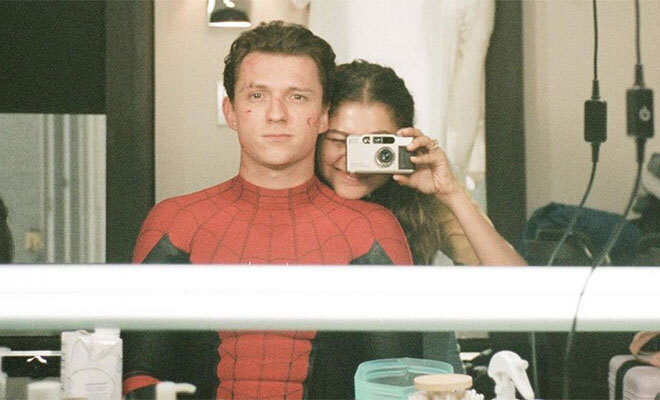 Tom Holland Hits Out At Paparazzi For Leaking Pics Of Him Kissing Zendaya, Addresses Concern Over Privacy

Recently, Spider-Man: No Way Home actor Tom Holland addressed privacy concerns over leaked photos of Zendaya and him kissing in a car. The actor shared how dating becomes difficult when the two people involved are public figures. He added that the downside of fame is that you cannot keep your personal life a secret, the moment shared between the two people who are in love becomes a moment everyone knows about. We kind of feel bad for them now!

Tom Holland is aware that he will have to answer a lot of questions about his relationship with Zendaya while promoting the forthcoming Spider-Man film, but he is ready to face them all like a true superhero.” It’s not a conversation that I can have without her,” he explained. “You know, I respect her too much to say… This isn’t my story. It’s our story. And we’ll talk about what it is when we’re ready to talk about it together.” Can we give him the best boyfriend tag already?

Zendaya also spoke about the leaked photos, she described the situation as quite strange and weird and confusing and invasive. Sharing her thoughts on their relationship, the Dune actress shared that she and Tom want to keep their relationship private for the time being. She also said, “I think loving someone is a sacred thing and a special thing and something that you want to deal with and go through and experience and enjoy amongst the two people that love each other.” We totally agree with you, Zendaya!

Also Read: Spider-Man: No Way Home: Tom Holland, Zendaya And Jacob Batalon Posted A Trailer Reaction Video And I Am So Excited!

The couple broke the internet recently when Tom Holland posted a picture of him and Zendaya on his Instagram handle on Zendaya’s birthday, and called her “My MJ.” We totally ship them without invading their privacy, of course!


Tom Holland and Zendaya play the role of Peter Parker a.k.a Spiderman and MJ in the Spider-man franchise. The third instalment of the Spiderman franchise, Spider-man: No Way Home is all set to hit the theatres on 17 December, this year.

You Deserve More Sex! 5 Reasons Your Sex Life Isn’t As Exciting As It Should Be