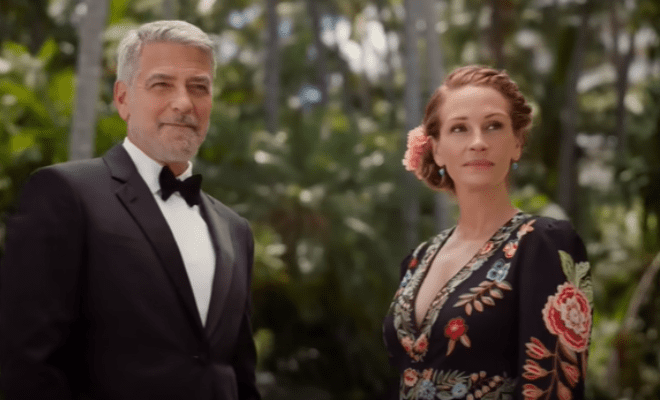 Julia Roberts and George Clooney make for a lovely couple on-screen. They are very cool off-screen rapport and have been good friends ever since they first appeared in the Ocean’s film franchise which was released two decades ago. Now, the pair is all set to reunite again in the upcoming romantic comedy film Ticket To Paradise. The trailer of this film dropped today. Apart from Roberts and Clooney, its cast includes Kaitlyn Dever, Maxime Bouttier and Billie Lourd. The film is helmed by Ol Parker who has previously directed Mamma Mia! Here We Go Again. Ticket To Paradise is set to release in theatres this October.

The trailer begins with both Julia and George boarding the same flight and being disappointed with seeing each other there. Julia asks for her seat to be changed because she and George were married once and now cannot stand one another. It is then revealed that they are going to stop their daughter, Lily, from marrying a guy she just met, so that she does not end up making the same mistake they did. To stop the wedding ceremony from taking place, Julia also ends up stealing the rings but Lily finds them and confronts her for doing so.

Julia and George are seen engaged in a constant banter throughout the tailer hinting at their fun and comfortable rapport on and off-screen. It appears to be a typical rom-com where I am assuming, Julia and George will end up falling in love with each other again. What left me annoyed was how the makers showed the entire plot of the film in the trailer itself. Now, why would I want to watch the film?

Despite this, the film looks entertaining!