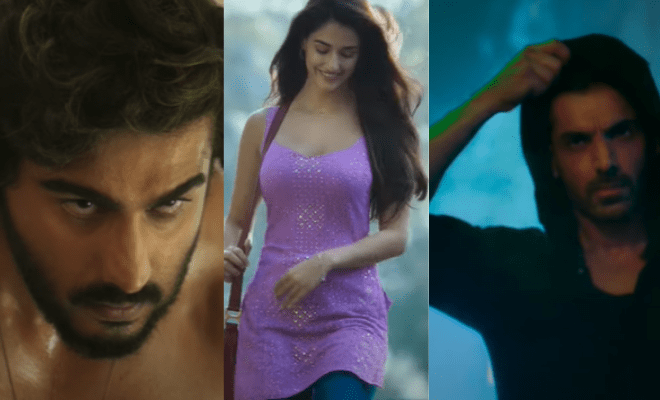 The 2014 crime drama film Ek Villain generally received good reviews and fans went on to praise Ritiesh Deshmukh’s performance as the antagonist. Now, the sequel of the film, Ek Villain Returns is gearing up for its release and its trailer was dropped today. The cast of the film includes John Abraham, Disha Patani, Arjun Kapoor and Tara Sutaria in lead roles. It is helmed by Mohit Suri and produced by Bhushan Kumar. The release date of the film is set as July 29, 2022.

The trailer begins with the announcement that the serial killer who only targeted girls is on the loose again. The murderer only targets those girls who have one-sided lovers and he wants to take revenge on those girls for not loving their lovers back. The frame shifts to John Abraham and Disha Patani’s love story. They are shown to be the typical grumpy guy and bubbly girl couple. And then Arjun Kapoor and Tara Sutaria are introduced as the fun-loving couple who live in the moment.

One moment they are romancing their lady loves and next, they are beating people up! John and Arjun confront each other and declare themselves as the hero and villain of each other’s stories. (Very random, but okay!) After a couple more unnecessary fight scenes, where John delivers a very cringy dialogue, and Arjun responds with an even more cringy one, they pick up the masks of the serial killer, wanting us to believe that maybe, they are the murderer.

Now if you are wondering if Tara and Disha are just arm candies in the film. Then, let me clarify that they are not. They also are seen using the same serial killer mask and going around the city murdering people. So, now, who is the actual killer? Unfortunately, you will have to watch Ek Villain Returns to know.

Well, the Ek Villain Returns trailer looks very messy and full of cringy dialogues and it is making us wonder what the movie will entail!