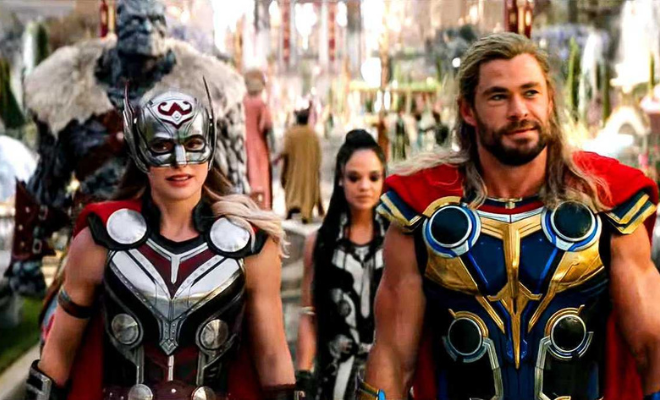 You know, Marvel has officially become our favourite Santa and we don’t have to wait till Christmas to receive the gifts because they are continuously spoiling us by releasing top-notch content. Honestly, Phase 4 of the Marvel Cinematic Universe is just amazing. And there is good news for all the Indian fans, we will get to meet The Mighty Thor a day earlier because the film Thor: Love and Thunder is going to release on July 7 in India. Wow, that’s exactly what superheroes do!

On Friday, Marvel India shared a post on their social media account and announced that Marvel Studios has preponed the release date of Thor: Love and Thunder and now, we will get to meet Natalie Portman aka the Mighty Thor and Chris Hemsworth aka Thor Odinson a day earlier – June 7 instead of June 8 and we are totally loving it. The film also features Tessa Thompson as the new King of Asgard, Taika Waititi as Korg, and Christian Bale as Gorr the God Butcher aka the antagonist. So, we are desperately waiting for ‘Thorsday’ to arrive, to be honest!

Also Read: Early Reviews Of Disney+ ‘Ms. Marvel’ Are Out, And There’s A Nod To SRK That Everyone’s Loving!

Talking about the film, we are going to see God of Thunder dealing with his existential crisis and an intergalactic killer – Gorr the God Butcher, who is trying to eliminate every God. Thor will form an alliance with his alien friend Korg, King Valkyrie, and Jane Foster/The Mighty Thor to defeat him. This sounds very interesting, right?

Meanwhile, Thor: Love and Thunder is going to release in theatres on July 8, in the United States.