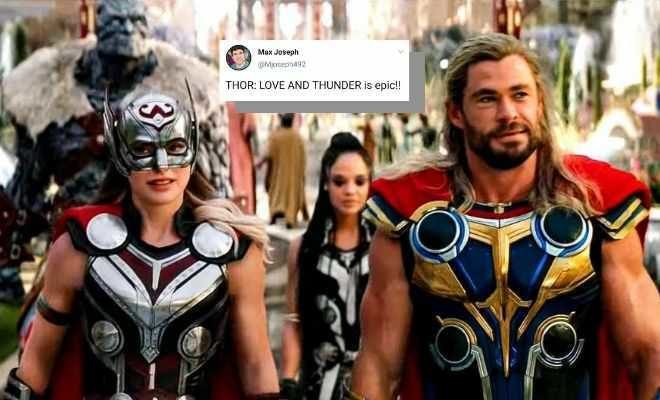 ‘Thor: Love And Thunder’ Early Reviews: Chris Hemsworth And Natalie Portman Starrer Is Being Called The Best Film Of The Year

Okay, I love watching superhero films because it works as free therapy for me, not gonna lie. And if we are talking about superhero movies, we have to mention Marvel, as they make the best superhero movies. And today we got the early reviews of their upcoming film Thor: Love and Thunder starring Chris Hemsworth, Natalie Portman, Tessa Thompson, Christian Bale, and Taika Waititi amongst others, looks like we just got the most epic film of the Marvel Cinematic Universe. Not surprised at all, to be honest!

You know, when I heard about the cast of this Marvel movie, I knew that it is going to be the most amazing movie of this year and looks like I was not wrong at all. Directed by Taika Waititi, the film revolves around our God of Thunder aka Thor played by Chris Hemsworth, he is going to form an alliance with his alien friend Korg (Taika Waititi), King Valkyrie (Tessa Thompson), and his ex-lover Jane Foster/The Mighty Thor in order to defeat an intergalactic killer named Gorr the God Butcher played by Christian Bale, who wants to eliminate every God. According to the early reviews, Thor: Love and Thunder is the best film of the year and we totally get it.

Take a look at the early reviews here:

Can a god love? Can a god be loved? Believed?

I knew I was right.
Thor love and thunder is the best marvel film of the year as per the reviews. https://t.co/slHTfEnd4p

THOR: LOVE AND THUNDER is epic!!

• Bale is BRILLIANT. He’s horrifying, and a stunning addition to the MCU

• The Goats are my everything

More thoughts later, but I hope everyone loves it!!

In first reviews, Natalie Portman’s performance as the Mighty Thor in Thor: Love and Thunder is being called “phenomenal” “outstanding” and that she is “FINALLY given her due” and “steals the show.” pic.twitter.com/Zjo7nzeRGy

THOR: LOVE AND THUNDER is the perfect blockbuster. Not only did it feature dazzling combat sequences, but I actually cried, it’s that emotional. And call me crazy, but I humbly predict that it WILL land a Best Picture nod next year. It’s not just THAT good, it’s VERY good.😉

#ThorLoveAndThunder reviews gonna be like “Thor Love and Thunder is the best Marvel film since Iron Man. Action packed, funny and emotional. Taika brings his A game. Natalie steals the show and Bale is the best villain since Thanos. The post credit scene changes the MCU forever” pic.twitter.com/LeV4nwDUUF

thor love and thunder is getting good reviews pic.twitter.com/Q6hHCNQwAk

i will be seated for thor love and thunder idc

And we got some spoilers as well. Marvel’s post-credit scenes are our favourite, to be honest!

After reading such excellent reviews, we are very excited to watch the film. We are here for Mighty Thor and God of Thunder!

In India, Thor: Love and Thunder will release in theatres on July 7, 2022.