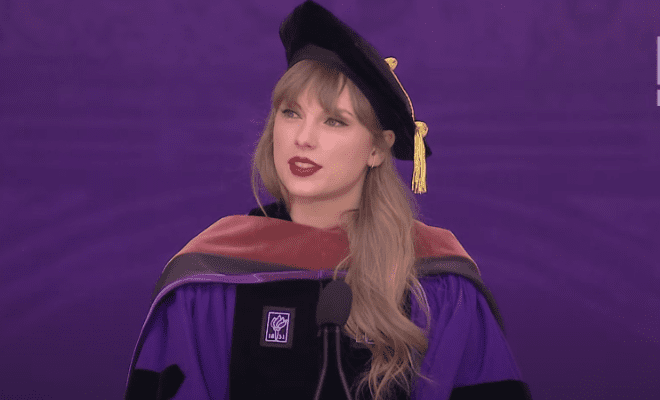 Taylor Swift Receives Honorary Doctorate From NYU, Her Speech Was The Perfect Balance Of Humour And Wisdom

We all know that the entertainment industry welcomes anyone and everyone with open arms irrespective of their educational backgrounds. But education is important, no matter what profession you are in. Earlier, we saw several celebs making it big with or without an educational degree but over the years, this trend has changed. Today, we have celebrities who are engineers, doctors and even lawyers. And now, international singing sensation, Taylor Swift has received an honorary doctorate degree from New York University on Wednesday morning. Yepp, and get this, the singer also gave a rather interesting graduation speech.

Taylor Swift got an honorary Doctorate of Fine Arts from NYU for being a ‘trailblazing and influential advocate for artists’ rights’ and for being ‘one of the most prolific and famous musicians of her time’. The American singer-songwriter wore a black dress with a graduation gown and cap to New York’s Yankee Stadium to receive her honorary Doctorate degree. Speaking to the class of 2022 at the ceremony, the singer thanked her parents and her brother for the sacrifices they made so she could go from singing at coffee houses to becoming a successful singer and be present in front of the students at NYU. But she also made sure that her speech was full of jokes and puns as well. Taylor Swift thanked all the trustees of NYU for honouring her with the Doctorate and hailed the other people with her who received the honorary Doctorate while joking that she’s “90% sure” that she’s receiving the degree only because she has a song called ’22’.

Also Read: Taylor Swift Is A Proven Music Icon. Why Are Men Like Damon Albarn Still Doubting Her Success?

Taylor Swift also thanked NYU for making her a doctor, on paper. “I’d like to thank NYU for making me technically, on paper at least, a doctor. Not the type of doctor you would want around in case of an emergency unless your specific emergency was that you desperately needed to hear a song with a catchy hook and an intensely cathartic bridge section or if your emergency was that you needed a person who can name over 50 breeds of cats in one minute,” said the singer in her speech. She opened up about how she never had a normal college experience and revealed that the ending of her music video of ‘love story’ was set at her fantasy imaginary college. She also spoke about how the students also did not have a normal college experience due to the Covid-19 pandemic and had to remain locked up in their dorms and pass several Covid tests along with their other college tests.

Also Read: Mirror, Mirror On The Wall Does Tara Sutaria Look Like Taylor Swift At All? Well, Internet Thinks So

Taylor Swift also took the opportunity to share some guidance with the students and urged them to not hold grudges and baggage with them as they move forward in life. She asked them to let things from their past go as they build a new life for themselves in the outside world.

Well, it may be honorary but the singer totally deserves it. We are so proud of you Doctor Taylor Swift!

Taylor Swift Fans Are Throwing Major Shade At Jake Gyllenhaal Keeping The Scarf After “All Too Well” Video!