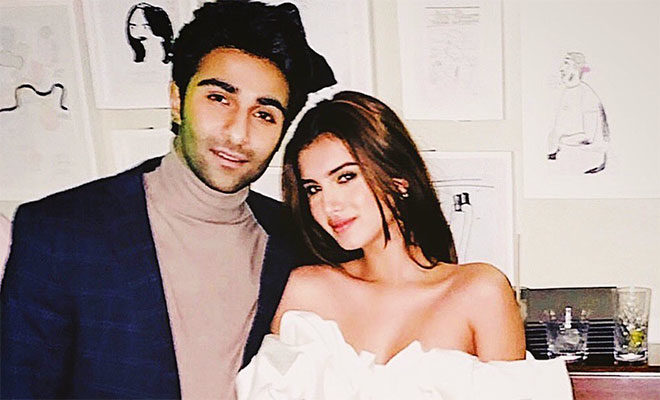 Yes, you read it right! Love birds Tara Sutaria and Aadar Jain are another couple in Bollywood who is all set to walk down the aisle very soon. The beautiful couple is planning to tie the knot early next year. Seems like the wedding season for Bollywood will not be ending any time soon, what with the Vicky Kaushal and Katrina Kaif wedding and the rumoured wedding of Aadar’s cousin, Ranbir Kapoor with Alia Bhatt. And we are not complaining at all!

A post shared by AADAR and TARA FC (@aadar.jainn)

Tara Sutaria and Aadar Jain have never really tried to hide their relationship like other celebrity couples. They post pictures together and support each other’s film projects. They even go on vacations together and document all about the trip for their fans. Their relationship first came into focus when Tara Sutaria attended Aadar’s elder brother Armaan Jain and Anissa Malhotra’s wedding ceremony. They even performed together on ‘Jinne mera dil luteya’ and set the stage on fire with their chemistry.

Also Read: Sara Ali Khan, Tara Sutaria, Everyone Is Wearing Chikankari Kurtas And We Think They Are The Breeziest Summer Staple

According to some reports, Aadar and Tara decided to make the relationship official while vacationing in Goa. As per sources, the couple will get married before Aadar’s cousin brother Ranbir Kapoor. Ranbir Kapoor and Alia Bhatt are also set to get hitched in the summer of 2022, and they might announce their engagement at the end of this month. Vicky Kaushal and Katrina Kaif have already started the preparations for their special day. Seeing the guests list, we are excited about all the performances and pictures.

Meanwhile, the Student of the Year actress is waiting for her next release Tadap. The film will be released on December 3, this year. Tara is paired up with debutant Ahan Shetty, son of Suniel Shetty.

Deepika Padukone Hinted At Alia Bhatt And Ranbir Kapoor Getting Married And Then Said She Was Kidding. Do We Buy That? Nope.