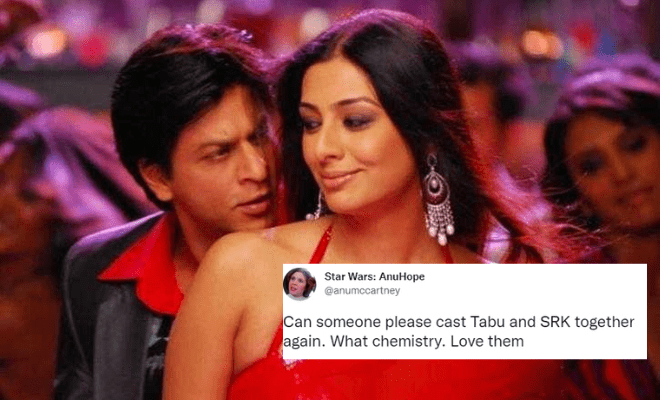 Twitterverse Is Demanding Bollywood To Cast Tabu And Shah Rukh Khan In A Film Together, Their Deewangi Is Totally Valid

You know, Indian cinema is known for its classic films like Mughal-E-Azam, Sholay, Hum Aapke Hain Kaun..!, Lagaan, and many more. But do you know what makes these Indian films so great? Well, the answer is iconic on-screen pairings with great chemistry. And it’s a fact that Bollywood is known for its iconic on-screen pairings for a very long time. And I know that you are thinking about Kajol and Shah Rukh Khan from Dilwale Dulhaniya Le Jayenge but let me tell you, some people on Twitter are losing their minds over SRK and Tabu, they want these two actors to star in a film together as a couple and we are totally here for it. This pairing is definitely a *chef’s kiss*.

Okay, we will admit that Shah Rukh and Tabu are one of the finest actors in Bollywood, their exceptional acting skills and charming personality steals the heart of the audience again. And looks like people are ready to witness the magic of this jodi again. Many Twitter users recently assembled to root for their favourite actors to be paired together as a lead couple in a Bollywood film. Their fans have literally flooded the social media platforms. Desi Twitter, we support this initiative!

They are urging Bollywood to cast Tabu and Shah Rukh Khan in a movie together. Are you listening, Bollywood?

@ bollywood CAST them in a movie as leads pic.twitter.com/Zop25vLkls

I’ll throw my money to watch a film like this with SRK & Tabu in the leads. https://t.co/eokIH3I4g6

Please i have been crying for SRK -Vidya/Tabu for years. Bollywood do something right for once 😩 https://t.co/IK8kOuLJ9G

Also Read: ‘Ms Marvel’ Writer Sana Amanat Says If Shah Rukh Khan Wants to Be In the Series, They Are Ready To Reshoot It

Many people want them to star in a rom-com.

On the other hand, some people want them to feature in a thriller film which is also a good idea.

SRK and Tabu in a Thriller when @ bollywood 😩 https://t.co/01xZWlFb2X

@ bollywood CAST them in a movie as leads pic.twitter.com/Zop25vLkls

Well, we think that the two incredible actors will surely steal our hearts with their chemistry if they ever star in a film together. What do you think? Ajay Devgn, Tabu Starrer Hindi Remake Of Tamil Film ‘Kaithi’ Finally Gets A Title And Release Date. We’re Very Excited For This One!