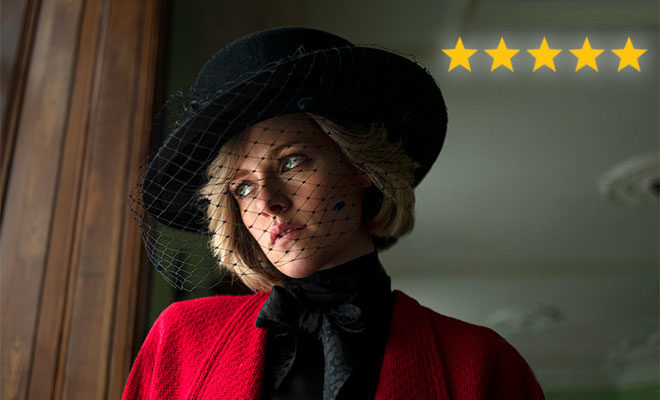 At one point in Spencer, Kristen Stewart as Diana is in a spectacular white (and gold) dress with heavy tulle, traipsing through her boarded-up childhood home. The eeriness of that scene reminded me of the Woman In White, a ghost borne of unrequited love and loss. And somehow, this theory just fit, given the circumstances that brought her there. That’s how haunting this fairytale turned fable by Pablo Larraín and Steven Knight is in its telling of the story of the late Diana, Princess of Wales. Spencer is no documentary, neither is it The Crown or a biopic on Lady Diana Spencer. It is quite evidently a horror affair, IMO, that tackles feelings of claustrophobia, entrapment, loneliness, paranoia and all those very real fears that we humans have in our relationships. And Kristen Stewart as Diana surprises in every single scene.

Spencer is directed by Pablo Larraín, written by Steven Knight, with cinematography by Claire Mathon and editing by Sebastián Sepúlveda. The music is by Jonny Greenwood. It also stars Timothy Spall, Jack Farthing, Sean Harris, Stella Gonet, and Sally Hawkins, amongst others.

Most tellings of Princess Diana’s story inevitably veer into the whole ‘fairytale gone wrong’ mode of storytelling. And yet, I don’t think there has been any attempt to horror-ify it, which when Larraín does it, feels like the most obvious thing that should’ve been considered! As we become voyeurs (much like the paparazzi that is hounding her every move) of her troubles, we realise that Princess Diana was caught in a situation that would scare the shits (pardon, your royal highness) out of any of us, and drive us insane—a crumbling marriage, her husband’s mistress right in her face at all times in social situations, an overbearing family, royal duties that always ask you to put the country over your person, having no control over her children’s upbringing, the constant scrutiny, being caged, and being watched, being weighed, the loneliness… all of it at such a tender young age.

Just reading this would make us break into a cold sweat, which automatically suggests that it would make for a great modern horror take on a twisted fairytale, where the Princess is lost and must find the courage to brave through the dark and save herself. For this brilliant, inventive insight, I would like to tip my hat to both Steven Knight and Pablo Larraín, as well as the teams involved in creating this spooky, eerie, downright difficult to breathe in kind of atmospheric horror in every other frame. Just the way Diana whispers the name ‘Spencer,’ in one of the first scenes in the film should give you chills.

Spencer is set during the December 1991 Christmas celebration amongst the British Royal Family at Queen Elizabeth’s Sandringham Estate in Norfolk. The opening sequence is brilliant; it establishes the tone of the rest of the film. Expect no warmth or unplanned happenings here, and not a hair out of place. That is until Diana (Kristen Stewart) arrives, driving a convertible with the top down, wind in her hair, minus security detail, having lost her way, and of course, rather late for the sandwiches. No wonder that this bothers Major Alistair Gregory (Timothy Spall), who has been brought in to look over the staff and the overall stay of the royal family in Sandringham after the media’s growing obsession with the Princess of Wales.

The Queen’s estate is sprawling, and yet, through Diana’s moments within those walls, you see how she hates the fanfare and can barely breathe. A nice setup for a later scene is when we see just how much Diana feels bothered by closed curtains, even sewn shut at one point, but finally breathes freely in a house with boarded-up doors and windows. A series of things happen to Diana in the house—from finding a book on Anne Boleyn (another abandoned wife of the royal family) in her bedroom, being royally ignored by the rest of the family, to struggling with an eating disorder while everyone urges her to put on weight for a bit of fun royal game and her husband, Prince Charles (Jack Farthing), judges her for it. Her only solace is the companionship of the royal dresser, Maggie, but even that is under constant threat of being taken from her.

The only people happy in her presence, and in whose presence she lights up, are her sons, William and Harry. And that is one sweet relationship through which we get glimpses of what might have been the Diana Spencer when she was lighter and not so worn down by the turmoil raging within her.

Spencer does a masterful job of bringing forth the inner turmoil of Diana, by making us, the audience, feel every bit of the dread she is feeling, Us Twilight fans know just how excellent Kristen Stewart is during scenes that depict the awkwardness and discomfort of a character. In this film, she cranks it up to a 100. That coupled with the horror-like treatment of the film make you feel her pain, wish for her escape, and breathe a long sigh of relief when she finally runs free.

Also Read: Kristen Stewart Gets Engaged To Dylan Meyer After Dating Her For Two Years

One of my favourite parts about Spencer is just how barely any focus or for that matter dialogue has been reserved for the members of the royal family, including the Queen. We barely see their faces during the gatherings, their outfits are unremarkable, and their exchanges with Diana are minimal. In fact, their silences are so disturbingly quiet (this one scene where Timothy Spall’s Gregory creeps up on Diana) that you can feel their eyes on Diana, and you actually experience second-hand discomfort. Everything you feel and experience, those emotions are actually brought on by the visual settings, the background score (again, like a horror film’s), the camera movements, and Kristen’s performance.

There are several memorable scenes but a personal favourite is where she drinks soup at the table with the family, and it turns into a creepy nightmare. To complete the whole thing, Diana feels haunted by a ghost, which again, is a nice Christmas story that begins scary but ends up with a miracle. Quite literally, if you pay attention to the song that plays in the final scene. I also enjoy the allegories strewn across the film, such as the pearls, and the pheasants bred to be hunted, and how Diana tries to break the cycle with her sons. 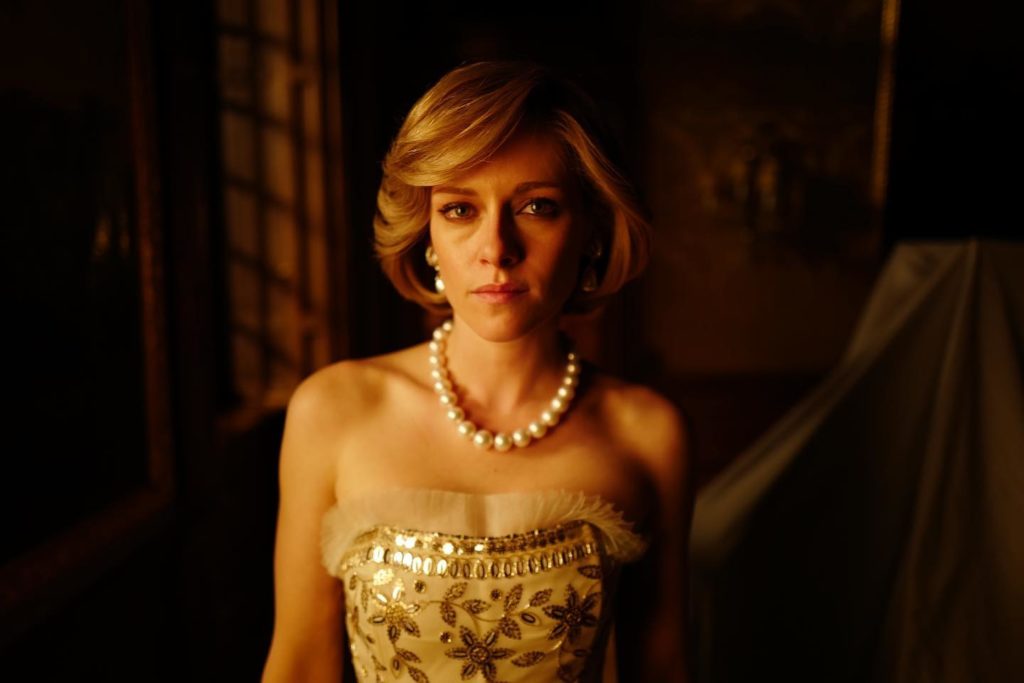 But we need to talk about Kristen Stewart, people. So. Many. Chills! As a Twihard, I take great pride in saying that my homegirl Bella, Kristen Stewart is quite the revelation in Spencer. There are many who have stood by her and vouched for her being the talented actress she is, but with Spencer, Stewart truly puts forth a career-defining best and gives the audience and critics a lot to gush over. She of course looks the part. But she also nails the accent, the posture, that head-tilt, the child-like disdain for rules and the hesitance to break them out of a conditioned fear of what people will think of her. It’s hard to pick favourites again here, but the scenes with the two young princes and the one at night in the old Park House estate that used to be her home, really stand out for me.

I love the way Spencer is shot because each scene feels like a piece of carefully constructed art. You know, when you see these beautiful marble statues in museums that inspire simultaneous feelings of both sadness and beauty. Those are the emotions that Pablo Larraín’s film evoked in me—a beautiful Diana who is clearly sad but is told that her duty above everything else, for her country, is to just keep being beautiful. Which is sad.

Also Read: Princess Diana’s Story On The Crown S4 Made Me Appreciate What Meghan Markle Is Doing Even More

If I could, I would tell you every single feeling I felt when I watched every scene in Spencer, but that would take away from your own experience of feeling it all for the first time, and then the sweet catharsis that comes in the very last scene. And that’s a spoiler I do not condone.

Spencer is a beautiful and sad film about a beautiful and sad and much-loved princess, who was supposed to get a fairytale but got a twisted one instead, which became a fable for future generations. And this pseudo-horror spin on it by Pablo Larraín and Steven Knight, with all the tropes so well used, is just a brilliant way of manifesting Diana’s inner turmoil all for the audience in a very real, palpable way so that they actually experienced those emotions. Kristen Stewart definitely deserves all the praise and hype she has been getting for her portrayal of Diana, the Princess of Wales, in this unmissable film.

Spencer was released in cinemas in India on November 19, 2021.

Kate Middleton’s Outfits On The Pakistan Tour Is Desi Done Right. None Of Those Garish, Token Fashion. Phew!