It is a sad moment when you lose a person who you have looked up to as an icon for your entire life. Actress Sonam Kapoor is currently going through a similar kind of emotion after the demise of Japanese fashion designer Issey Miyake. We are all aware of Sonam’s great sense of fashion but now we also how did she form her definition of fashion. In just two-line the Neerja actress has expressed her admiration for Issey Miyake and mourned his death.

Issey Miyake a legendary fashion designer breathed his last on August 5, Friday. The world mourned the loss of the iconic designer who had immensely contributed to the world of fashion. However, for Sonam, this loss was quite personal as Issey Miyake had a great impact on her life when it comes to fashion and its definition. On August 9, Tuesday, Sonam took to her social media to post a picture of Issey Miyake with a caption. In those few words, Sonam wrote that Issey was his mother Sunita Kapoor’s favourite designer. She also referred him to be her “introduction to the world of fashion.”

Sonam Kapoor dedicated more stories to Issey Miyake on her Instagram. She reshared many posts by different fashion magazines and paid her condolences to the icon. She did not express the loss in more words, however, her posts spoke a lot about the actor’s respect for Issey Miyake. 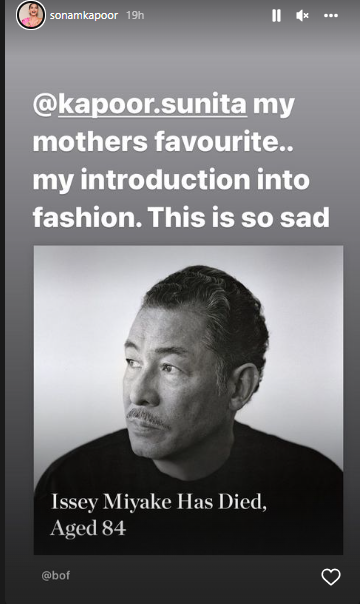 It is a great loss in the world of fashion.