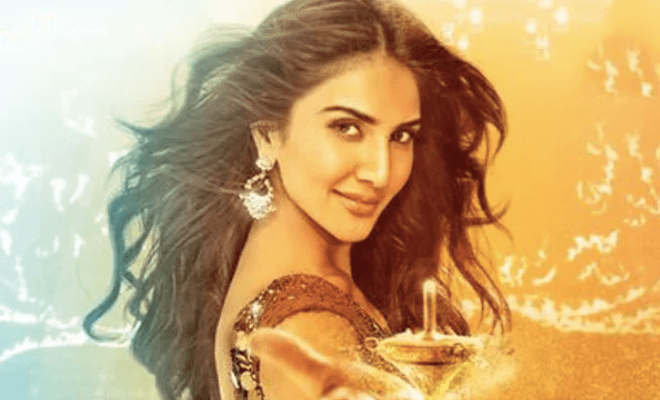 Vaani Kapoor Introduces Her Character From ‘Shamshera’ In A New Poster, Ahead of Trailer Launch

Much like Ranbir Kapoor, Vaani Kapoor has also been missing from the big screen for a while now but I guess that’s the result of the pandemic-induced lockdown. Thanks to the lockdown, we haven’t been able to watch our fave stars on the big screen but with those days returning, we’ve all been holding our breaths for a lot of upcoming releases, one of which is Ranbir Kapoor, Sanjay Dutt and Vaani Kapoor starrer Shamshera. This Karan Malhotra directorial period action drama film is set to hit the theatres on July 22 in Hindi, Tamil and Telugu. And the trailer of the film is all set to release on July 24. Ahead of the trailer launch, the actors of the film have been introducing their characters.

Taking to Instagram earlier today, Vaani Kapoor introduced her character, Sona. Vaani Kapoor is playing the role of a dancer in the film in which Sanjay Dutt plays the antagonist, Daroga Shuddh Singh, and Ranbir Kapoor plays the role of the legendary hero, Shamshera. Introducing her character with a poster, Vaani revealed that Sona not only has a heart of gold but is also known to be relentless. Take a look at the stunning Sona in gold and red sequined lehenga in this poster from Shamshera.

Speaking to the media about her role as Sona in the film, Vaani Kapoor said that she is one of the most sought-after travelling performers of India in the 1800s. She further shared that Sona not only has strong willpower but is also confident, and a go-getter but she has her fair share of weaknesses and emotional vulnerabilities. Vaani also revealed that Sona is important to building the narrative in the story. She also added that Sona is a refreshing character to play on screen. Vaani Kapoor hailed Ranbir Kapoor and called him a “powerhouse of talent”.

Earlier today, Sanjay Dutt had also revealed the poster of his character in Shamshera, ahead of the trailer launch. The actor plays Daroga Shuddh Singh who is known to be a ruthless authoritarian. And let me add, the actor looks menacing in the poster. Speaking about his role, Sanjay Dutt shared that he is excited to play the role as he gets to “bend the rules, break the rules” but playing the role also comes with its own set of “impositions” or “moral boundaries”. He also called Shuddh Singh “pure evil”, “menacing” and “untrustworthy”.

FYI, Shamshera is set in the backdrop of the fictitious city of Kaza in India in the 1800s. It follows the story of a warrior tribe that is imprisoned, enslaved and tortured by Daroga Shuddh Singh and how one of the slaves goes on to become a leader and then a legend for his tribe after her fights for his tribe’s freedom and dignity. Well, we just cannot wait to finally get a glimpse of the film via the trailer tomorrow.