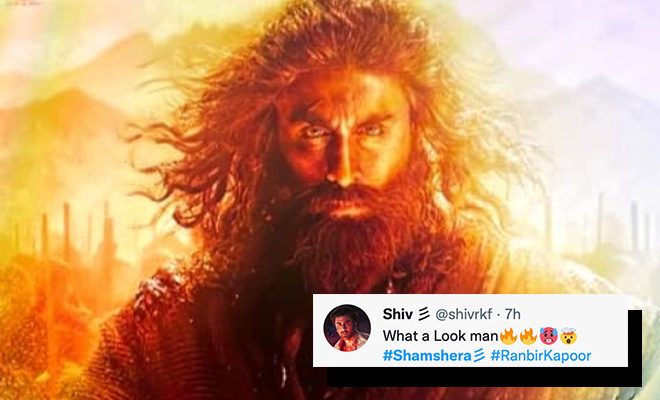 Well, being a hardcore Ranbir Kapoor simp, I am waiting to watch this man in action on the big screen. And while we’ve already got a glimpse of Ranbir’s upcoming release–Brahmāstra, another surprise has dropped upon us. Yes, you read that right! The actor has been prepping for his four projects for the past few years namely–Brahmāstra, Animal, an untitled film alongside Shraddha Kapoor and Yash Raj Films’ Shamshera. And we might have gotten a glimpse of the latter.

Internet welcomed a big surprise today when Shamshera‘s poster got leaked. Yup. And Ranbir’s fans soon came to hail the king, in a never-seen-before avatar. Ranbir as we see in the poster looks intimidating with long hair, beard and a rugged face. He poses against an intense backdrop of mountains and a hundred armed men. The film has been creating a buzz for quite some time and looking at this poster, we think it’s worth the wait. Also starring actors Sanjay Dutt and Vaani Kapoor, the poster of the period film left the fans excited.

And reacting to Ranbir’s first look poster from the film, Twitter rushed to give its two bits. While many praised Mr Kapoor’s fierce avatar, with fans loving his “hot” look, a few others arrived to draw comparisons with Lord Of The Rings, Thor and blockbuster hit like–KGF. Checkout the internet’s pariwaar‘s reaction to the poster.

This movie is a mega hit…note it down. People will rush to the cinemas for this extremely captivating look of Ranbir Kapoor that we have never expected. #RanbirHotInShamshera pic.twitter.com/DYkLwZzekW

#RanbirHotInShamshera undoubtedly,
hopefully movie will be a good watch for us!! pic.twitter.com/AtHZbZdk0a

This is going to be one of the best movies of Ranbir Kapoor for sure. This poster looks so awesome. I can't wait to watch the trailer#RanbirHotinShamshera pic.twitter.com/KpN5KlDOjT

Had to be said
all pumped up for this one !!#Shamshera彡 pic.twitter.com/uU1YQX0Rt9

People who want to learn how to act in historical films,
Bas SHAMSHERA dekhlena!!😉💥#ShamsheraPosterLeaked #Shamshera彡 pic.twitter.com/0cteoNwAll

This is insane 😳😳Omg #RanbirKapoor 🔥🔥What poster of #Shamshera彡 This is his era for sure!!! pic.twitter.com/eRK6S5Cf6Z

He's the best….the best had stepped to this genre for the first time..& gonna show you what he's capable of…..Official poster loading! #Shamshera #LeakedPoster #RanbirKapoor pic.twitter.com/t67W0UttuO

This decade belongs to Ranbir Kapoor

The excitement is double, because it’s the first time that the actor is exploring a genre as intense as a period drama and we’re sure he will be fab in it as always. The Karan Malhotra directorial is set in 1800s and is slated to hit the theatres on July 22, 2022.

Best Dressed Stars On The Koffee Couch
By Ritu Sanghvi
On Jun 28, 2022