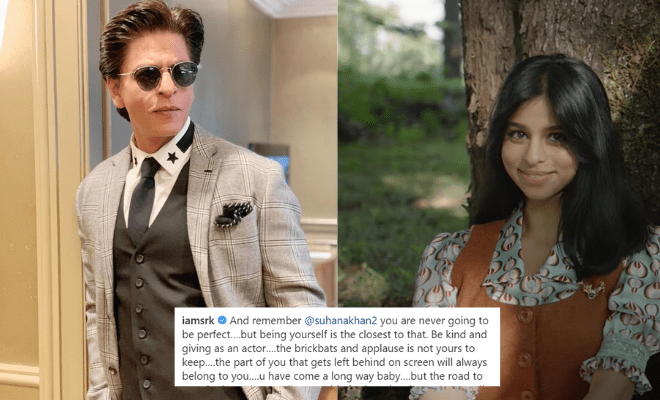 I still remember that moment when my parents read my name in the newspaper as a byline. The pride that they felt and the look on their faces is something I will never be able to forget. It is heartwarming when your parents feel proud of you, isn’t it? It makes everything you have done feel worthwhile. Parents, irrespective of their fields, are like that and Shah Rukh Khan just proved this! As his daughter Suhana Khan gears up for her acting debut with Zoya Akhtar’s film The Archies, he took to his Instagram to share the first look and cast of the same. While at it, the father-daughter duo had a sweet conversation in the comment section as well.

Sharing the poster of The Archies, Shah Rukh gave some golden advice to Suhana that being herself is the closest she will come to being perfect. He also wrote that the ‘brickbats and applause’ is not hers to keep. He further wrote, “u have come a long way baby….but the road to peoples heart is unending…..stride forth and make as many smile as you can. Now let there be Light….Camera and Action!”

To this sweet post, Suhana commented, “Love you, papa.” In return to this, SRK responded by writing that he is missing her and that she should take a day off from work, come to give him a hug and then go back again. Their cute conversation just did not end here. Suhana again replied by saying that she misses him more and that she will not be able to take days off now that she is a working actor. She then wrote that she is kidding and is on her way! How cute is this!

The cast of The Archies was announced on May 14 and social media could not keep calm! The film will release on Netflix in 2023.