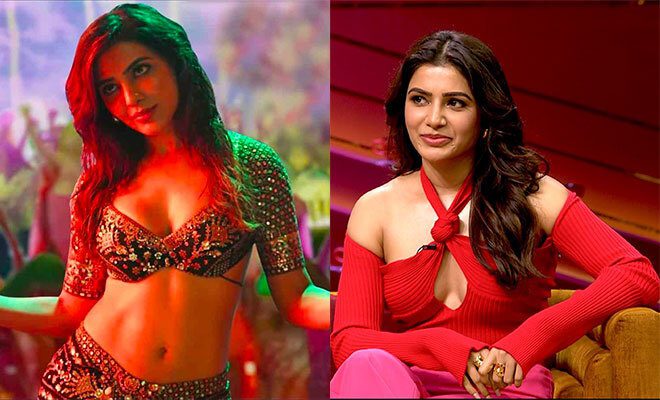 ‘Koffee With Karan’ S7 EP 3 : Samantha Ruth Prabhu Says Only A Nautch Girl Or A Heroine Could Justify The Satire Of Male Gaze In ‘Oo Antava’

It’s Thursday and following the day’s ritual, the third episode of Koffee With Karan season 7 is here. As we all know, the guests for tonight were Akshay Kumar and Samantha Prabhu, and the duo talked about a range of topics on the couch. However, this time Samantha really stole the limelight and the hearts as well, with many of her statements. One of which is the reason that she gave behind doing the song ‘Oo Antava’ in Pushpa. The song that broke the internet and the lyrics of which was a satire on the male gaze. Samantha Ruth Prabhu gave a clear perspective as to why she opted for it.

The third episode of Koffee With Karan had a really interesting pair grace the couch. While many chit-chats did make it for a fun episode, Karan Johar in between it all also brought up the topic of Samantha looking smoking hot in the song ‘Oo Antava’ from the blockbuster movie Pushpa. The lyrics of the song highlighted the male gaze. The Koffee With Karan host,  firstly went on to appreciate Samantha for giving such a bang-on performance in the song, and then further asked what made her do the song. To which Samantha replied that she loved the “tune, song” and also the fact that it was a “satire on the male gaze”. In addition to it, the Pushpa actress said that she had also been criticised for doing an item number on the song which was a satire on the male gaze. To answer this, Samantha had a very clear logic that a song that was supposed to be a satire on the male gaze could only be understood by a “nautch girl”(Samantha’s character in the movie) or an actress who has a wide range of encounters with the male gaze. Samantha further stated that she believes an actor’s body is used to express emotions, whether it is the actor doing physical stunts or an actress making a “statement” in a song. Samantha also said that there was nothing wrong in doing the song, rather it was some people who perceived it differently.

I guess what Samantha said holds very true and needs a  good amount of thinking and understanding.

Samantha Ruth Prabhu Reshares Rani Rampal’s Instagram Story About Raising Daughters To Be Capable, And We’re Here For It!