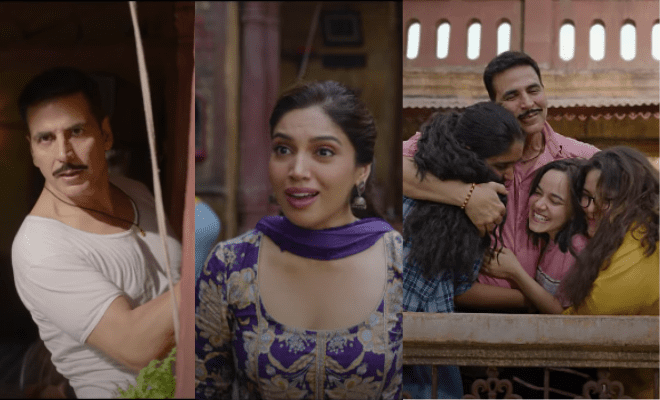 Get ready to get entertained by Akshay Kumar yet again with his new movie, Raksha Bandhan. The actor recently dropped the poster of his new movie and also announced the release date of its trailer – June 21, 2022. Yep, the trailer of Raksha Bandhan starring Akshay Kumar and Bhumi Pednekar was just released by the makers and I have to say that to me, it looked a bit too average. Directed by Aanand L Rai, the movie tells a story about almost every other Indian man who is worried about getting his sister(s) married.

On June 21, the makers of Raksha Bandhan directed by Aanand L Rai, starring Akshay Kumar and Bhumi Pednekar, just dropped their trailer and this family entertainer tells a common tale of every other Indian man who is worried crazy about getting his sister(s) or daughter(s) married. The actor shares screen space with his four sisters played by Sadia,  Sahejmeen, Deepika, and Smirithi.

The Raksha Bandhan trailer shows Akshay Kumar as some modern version of Maryada Purushottam Ram (as referred to in the trailer), who is willing to do anything to get his four sisters married – even sell his kidneys. And it is only after they get married, that will he get married to his childhood sweetheart, played by none other than Bhumi Pednekar.

Directed by Aanand L Rai and written by Himanshu Sharma along with Kanila Dhillon, Raksha Bandhan is a family drama that has a sense of humour that will make you chuckle. It seems to me, that the aim of this movie is to highlight how blessed one’s family is with the presence of a sister(s)/daughter(s).

Also Read: UP Government Announced Free Bus Services For All Women On The Occasion Of Raksha Bandhan

Raksha Bandhan is being presented by Akshay Kumar’s sister, Alka Hiranandani. She even is the producer of the film along with the director Aanand L Rai. The movie is also produced by Colour Yellow Productions, Zee Studios, and Alka in association with Cape of Good Films.

It is all set to release in theatres on August 11, 2022, alongside Aamir Khan and Kareena Kapoor Khan’s much-anticipated movie, Laal Singh Chaddha.