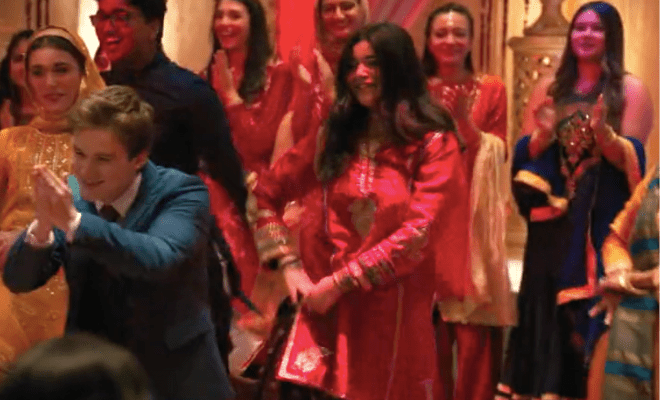 South Asian representation in western films and series has been time and again called out for the poor portrayal of brown people. The mainstream media in the West has time and again represented South Asians in the most problematic ways and continued the racist stereotypes. In fact, for a very long time, the only representation of South Asian people we saw in Hollywood was as terrorists or royals. The regular people did not have any desi character to relate to in Hollywood but we’ve all seen a shift in this over the last few years. While Kumail Nanjani’s Kingo in Eternals left us all red in the face after grooving to some random song but Bridgerton Season 2 won us over with not just the representation but also with the music. We rarely see Bollywood music in Western films and series but things seem to have changed for the better. After the K3G title track, the title track of Shahid Kapoor and Rani Mukerji’s film Dil Bole Hadippa! has made its way to Hollywood with Ms Marvel.

We’ve seen Hollywood using Bollywood music in films but the choice is usually very random or something that isn’t very relatable but this time, we’re impressed with the song choice. In a recent promo clip from the upcoming episode of the series which is to be released today, shared by Marvel Studios, the protagonist, Kamala Khan, dressed in a traditional salwar kameez, can be seen grooving to the Bollywood dance number ‘Dil Bole Hadippa’ on her brother Aamir’s wedding. And the best part is that neither the song nor the wedding festivities have been downplayed. Kamala’s white friend Bruno is also seen matching the steps and dancing along with her as the crowd around them joins in. Now, before I go on, check out this video.

It's wedding season! 💃 Check out this clip from a brand new episode of #MsMarvel, an Original series from Marvel Studios, streaming tomorrow on @DisneyPlus. pic.twitter.com/OTdnIAigFT

While I won’t say that I’m satisfied with the desi dressing but at least it’s not as shabby and embarrassing as most other Western films and series show. Most of the characters seem decently dressed in traditional outfits. But I must add, this series has made Bollywood connect stronger with the music as well as all the references. From Shah Rukh Khan films to a desi teen seeking permission from her parents to go out, everything in this series is completely relatable. The fact that this series is all set to show a South Asian wedding, the music and the representation seems a lot better than what Hollywood has done previously.

In just 2 episodes, Ms Marvel has won us over with the South Asian representation and made it relatable. The fact that the ethnicity and race of the protagonist, Kamala Khan, has not been made a big deal is what gives us immense relief and to add to that, this time, we have a Muslim superhero from Pakistan. We have a series where South Asians can be seen celebrating Eid and dealing with real-life issues and women’s rights, what more could we really ask for? And to add to that, I think the desi music in Ms Marvel really has my heart. Remember the scene where Kamala is walking up to Kamran’s car after school and Ritviz’s Sage plays? Well, yeah, that one is where my heart just skipped a beat. The Bollywood background music is just what we live for. Plus, we’ve also heard some AR Rahman and SP Balasubramaniam music in this series already. This has me wondering what more does it have in store for us all in terms of South Asian representation.