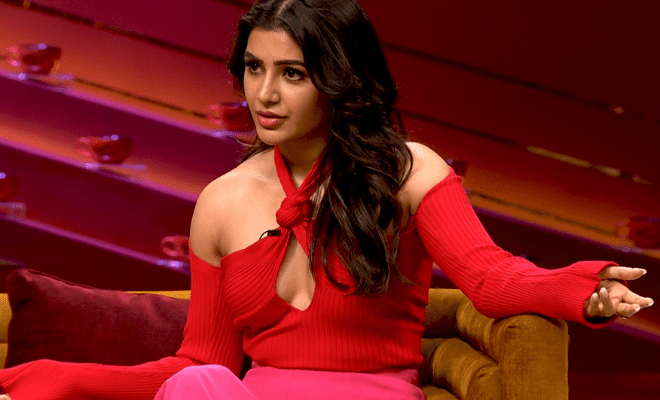 It is a Thursday today and the moment struck 7 PM, I immediately opened the Disney Plus Hotstar app to begin streaming the Koffee With Karan season 7 episode 3. Akshay Kumar and Samantha Ruth Prabhu were the guests for this evening. The two talked about their marriages and acting careers, and amid all that discussion, Karan Johar came around to talk about the whole nepotism debate and how it has come to be a very big deal in Bollywood. He asked Samantha how the Telugu film industry deals with nepotism as it is the ‘Big Boys’ club there.

Karan said that many of the popular Telugu male actors have grown up together, and some of them are also related to each other. He also said that someone’s son or nephew always becomes the lead actor and there’s a rare occurrence when an outsider like Vijay Deverakonda breaks through and makes his mark in the industry. On this, Samantha responded by saying that this thing is different from ‘apple to apple’. She further said be it ‘nepo kids or non-nepo kids’ everyone comes with their own demons and they have to face them.

She, then, went on to relate this to sports and said, “Once you’re in the game, even if your father is the coach, he is still standing at the sidelines. There is nothing that he can possibly do for you to win the game.” Karan then asked her about the ‘first move’ advantage. Samantha Ruth Prabhu replied to this by saying that after the first move, comes the second, the third and the fourth.

She also added that when she entered the industry and if she would fail, it was just her family who would know of it. But if a star kid fails, the whole country comes to know of their failure. Samantha also said that star kids are constantly compared to the legacy that they come from. Sharing her final thoughts on the topic, she said that finally, the ball is in the audience’s court.

If you haven’t watched the episode, go watch it and let us know in the comments what you thought of it!

My Forever Women’s Day Inspo Will Be Samantha Jones From ‘Sex And The City’. Here’s Why.