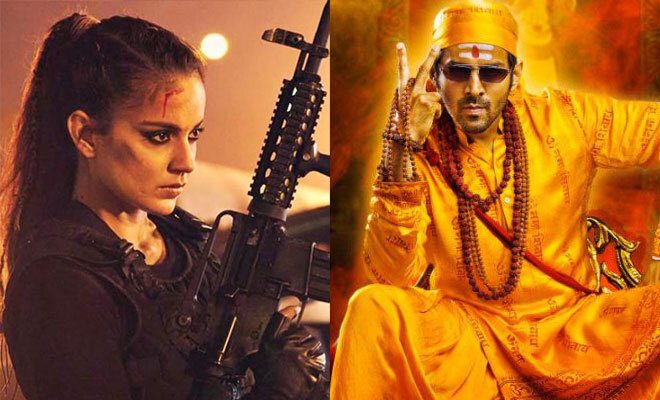 Kangana Ranaut Talks About The Box Office Clash Between ‘Dhaakad’ And Kartik Aaryan’s ‘Bhool Bhulaiyaa 2. Her Response Is Gold!

Kangana Ranaut is notorious for her controversial opinions and overall attacking personality. However, there are some rare occasions when she actually makes sense and isn’t completely absurd. For example, she recently was asked about her opinion on Dhaakad and Kartik Aaryan’s Bhool Bhulaiyaa 2 releasing on the same date. Check out what she had to say.

Kangana Ranaut was all praises for Kartik Aaryan when she was asked about Bhool Bhulaiyaa 2 and its clash with Dhaakad. The actress had all good things to say about Aaryan. She said that due to the pandemic, there has been a major backlog in the film releases and hence, getting an independent release is difficult for any movie. She said that be it Hollywood or South Indian films, they are all getting mainstream releases. Coming to Kartik Aaryan, the Manikarnika actor then added that she likes his work.

Ranaut said that she believes he is an actor from the current generation who is rising to the top based on his own calibre. “He has come up on his own and I have a huge appreciation for him,” said Ranaut according to sources.

Commenting on the clash of the release dates Kangana Ranaut said that it isn’t like both the movies are being shown on 5000-7000 screens together. She said that both movies can release simultaneously and can do well.