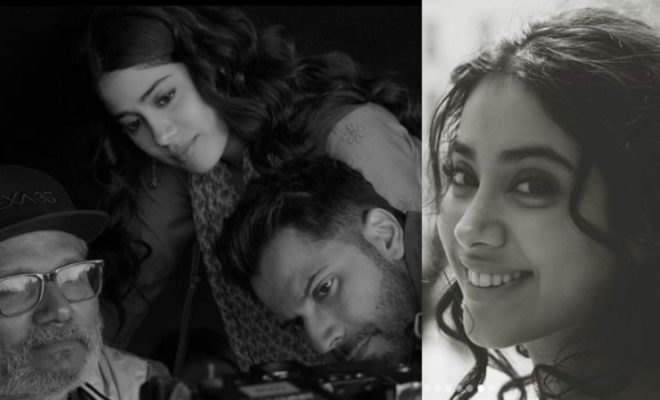 Janhvi Kapoor Wraps Up Her ‘Bawaal’ Days, Extends Her Gratitude Towards The Entire Team In A Heartfelt Note!

Janhvi Kapoor is currently making headlines for either her amazing projects or her entertaining videos on the social media platform. And we are loving her for that. The actress is quite busy with her bag full of interesting films, one of which is releasing soon. Janhvi is awaiting her next release Goodluck Jerry and we also got glimpses of her while she was shooting for Bawaal alongside Varun Dhawan. But now, the actress has completed her Bawaal days and as she bids farewell to the team, Janhvi has dedicated a beautiful note for them. Especially, thanking the director Nitesh Tiwari and co-actor Varun Dhawan.

A few days back, Janhvi and Varun shared some cool pics from their shoot in Amsterdam. But, now after completing the three months schedule of shooting for this exciting project, the actress clearly had her emotional moment which she aptly expressed in her recent social media post. On July 28, Thursday, Janhvi Kapoor took to her Instagram handle to share a series of monochrome pics from her “Bawaal” days. In the first picture of the post, Janhvi can be seen with Nitesh Tiwari and Varun Dhawan in which they are probably taking a look at a shot. The other pictures Janhvi shared showed all the fun moments, and team dinners the crew enjoyed during the shooting days. At the end of the picture series, there is also a quote that reads- “All the things that could happen next”.

The caption caught our attention, in which Janhvi has chosen the perfect words to describe her feelings about doing the project. The Goodluck Jerry actress wrote that she desperately wanted to do this film and also used to stalk Nitesh Tiwari and Sajid Nadiadwala. Janhvi also wrote that she hard time believing that she actually became a part of the project and considered herself lucky for getting this opportunity. She further thanked the director, Nitesh Tiwari from who Janhvi got to learn about movies and more importantly about life and values. The actress further thanked her co-star in the film Varun Dhawan, for all the fun moments they spent together on the set. Janhvi Kapoor extended her gratitude to the rest of the team and stated that she will miss them all. She referred to those three months of the shoot as magical and as it ends, she is “back to reality”.

Also Read: Varun Dhawan, Natasha Dalal Are Livin’ It Up With Janhvi Kapoor, Nysa Devgan, And Friends In Amsterdam

She is so sweet!