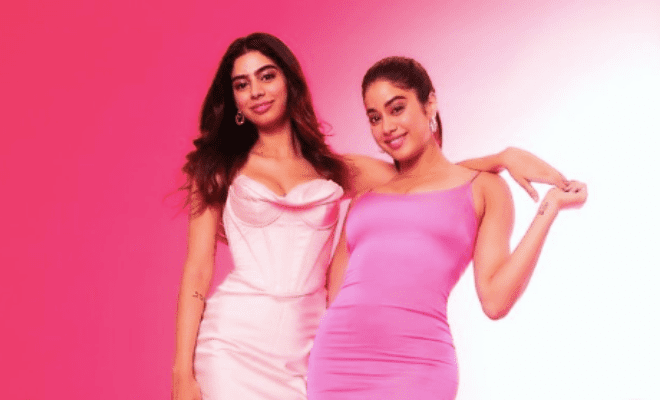 Being an only child, I always craved having an elder sibling, or a younger one for that matter. Not just because it would save me from mummy-papa ki daant but also because with an elder sibling I’d have someone to protect me. Older siblings are adorbs. No matter how much they annoy us, the fact that they stand by us in our hour of need is what really matters at the end of the day. And this applies to celebs too. Recently, Janhvi Kapoor turned into an elder protective sister for Khushi Kapoor and warned the trolls against troubling her sister.

In an interview with India Today, Janhvi Kapoor spoke about her sister Khushi Kapoor’s big Bollywood debut with Zoya Akhtar’s film The Archies which is set to release on the OTT platform Netflix in 2023. Expressing her excitement about her sister’s debut, Janhvi said that she is “happy and thrilled” about it. Sharing that she once visited the sets of The Archies during an outdoor shoot, the actress said that “their energy is so pure” and called the cast talented and hardworking. Speaking of Khushi, Janhvi said that she has seen her sister work “tirelessly” and “very hard”. She further added that Khushi wanted this role very badly and she is happy that her sister got it while hoping that things go well for her.

Addressing the trolls, Janhvi Kapoor said that she won’t be happy if they target her sister. She further added that if anyone says anything bad about Khushi Kapoor, she will “screw them up” while pointing out that she hates them. When asked if she has shared any acting tips or advice with her younger sibling, the actress said that Khushi does not need any tips and called her “brilliant”.

Well, hope the trolls have got the clear message Janhvi has for them. Don’t mess with the Kapoor sisters! Janhvi Kapoor Gets Nostalgic As She Visits Dhadak Shooting Location! Paoli Dam In Sarees Offers All The Durga Puja Style Inspo You Need!

Looking For Ways To Accessorise Your Festive Look? Take Cues From Kriti Sanon

‘Koffee With Karan’ S7 Ep 2: Janhvi Kapoor Talks About Sridevi’s Death And How Arjun, Anshula Kapoor Helped Her Through It