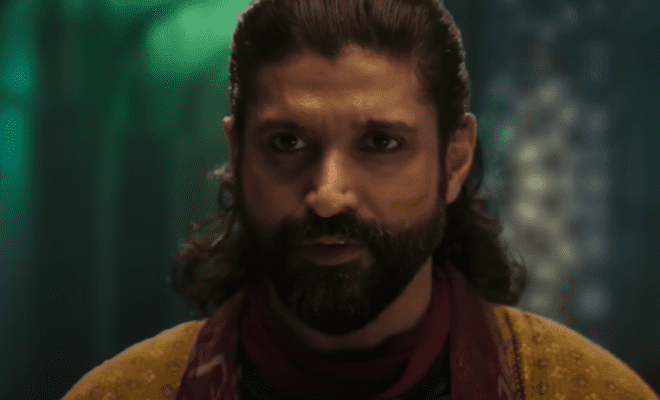 Ms Marvel is one of the most-loved Marvel shows of all time and there is no denying that and, the moment Ms Marvel fans were waiting for is finally here! After much anticipation, the makers of the show have revealed the full look and other details of Farhan Akhtar’s character in the episode four teaser video and we cannot keep calm! Fans have been waiting for a long time to know what role will Farhan play in the series ever since his part in the series was announced and today, their wish gets granted.

The teaser video shows Kamala Khan entering a secure hideout place that is apparently not open to outsiders. She is looking for information about her great-grandmother Aisha. While looking around the hideout place, Farhan Akhtar makes his entry. He says to Kamala that an exception can be made to accommodate those who are the ‘descendant of Aisha’s. He, then, goes on to reveal his name as Waleed and says to Kamala that they have a lot to discuss when she is ready!

The clip was shared with the caption, “My name is Waleed.” Check out @FarOutAkhtar and @AramisKnight in a brand new episode of Marvel Studios’ #MsMarvel, streaming tomorrow on @DisneyPlus.”

Earlier, a brief glimpse was given into Farhan Akhtar’s character. He was seen wearing a yellow and red robe with his hair tied atop his head. This was when Kamala was still figuring her superheroine self out. He, then, says to her, “What you seek is seeking you.”

The series premiere of Ms. Marvel, an Original series from Marvel Studios, is now streaming on @DisneyPlus. #MsMarvel pic.twitter.com/GVwEt13Uk7

Also read: ‘Ms Marvel’ Ep 3: What Is Djinn And Noor Dimension? How Is It Connected To ‘Shang-Chi And The Legend Of The Ten Rings’? Janhvi Kapoor Gets Nostalgic As She Visits Dhadak Shooting Location!
By Kinjal Panchal